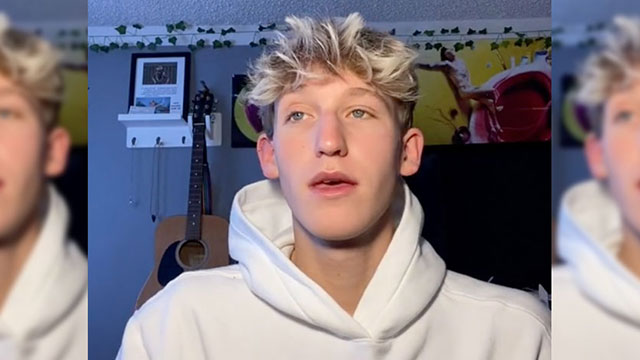 A high school senior in upstate New York is raising his voice after being told he couldn’t mention being gay as part of a ‘Senior Spotlight’ in the school newspaper due to a school policy – that apparently doesn’t exist.

Among the list of the questions sent to Johnson to answer was “What challenges have you faced and what have you done to overcome them?”

In a TikTok video that has gone viral, Johnson shared his response: “The biggest challenge I faced was growing up gay and coming out. I had to learn how to become comfortable in my own skin and how to stay strong through bullying and all the negative experiences I had while trying to navigate through life.”

But after submitting his answers for publication, Johnson says he was called to Principal Mike O’Brien’s office and told his answer to the “challenge” question couldn’t be included in the “Senior Spotlight.” The reason, he was told, is because the school has a policy prohibiting any mention of “sexuality, orientation, religion, or illegal drugs” in the school publication.

Johnson was given the option of changing his answer or the “Spotlight” would be run without that specific question and his response. Johnson decided he’d rather not be featured at all.

The principal apparently urged him to reconsider because he’s “such a positive face in our community.” But even after Johnson’s mother spoke with the principal, O’Brien was firm that no mention of Johnson being gay could appear in the feature. And so Johnson, too, stood firm and refused to be part of censoring himself.

In sharing the story with his TikTok followers, Johnson said, ““There are so many kids in our community and in our school that are going through the same things that I’ve gone through and that I’m still going through.”

“And reading that from me, and seeing that in our school newspaper, would give them the courage, and give them the strength, to know that it’s OK to be yourself,” he added.

That video clip has since garnered over 14,000 views.

By the next morning, Johnson had received tons of messages of support including a text message from the president of the Tully Board of Education. According to the Los Angeles Blade, the board president told Johnson she felt what was happening to him was wrong.

so this is pt. 2 to my last video #gay #gayteen #highschool #discriminacion #fypシ

That day, Johnson had another meeting with Principal O’Brien who not only expressed his support for a GSA (Gender and Sexual alliance) club that was in the planning stages, but that he’d managed to obtain an “exception” from the school district policy. Johnson’s uncensored answers could now be published in a future “Senior Spotlight” (the January slot had already been assigned to a different student).

Johnson and his mother shared with the LA Blade that they had learned that the school district “policy” banning mention of “sexuality, orientation, religion, or illegal drugs” was made up.

Apparently, Principal O’Brien had reached out to District Superintendent Robert J. Hughes for advice as to how O’Brien could remove Johnson’s response about being gay and facing down bullying. The resulting solution was to come up with a “policy” that didn’t exist.

In his video posted to TikTok, Johnson says he went back through several past “Senior Spotlights” and found that religion, for example, had been mentioned.

As the story continued to be shared on social media, Johnson and his mother also discovered that a social worker at Tully Elementary School was reportedly told to remove a mention of his husband in his staff bio even though straight teachers and staff members were allowed to include their opposite-sex spouses in bios.

Johnson now wonders why the principal and superintendent wanted to censor him, his coming out, and his overcoming being bullied.

This is beyond unacceptable! #gay #fyp #highschool #discriminacion #schoolboard #boostofhope

On Sunday, Hughes issued a school community newsletter to address the controversy. Hughes wrote that the decision to not include Johnson’s response regarding being gay was his. He felt it would “stir up additional controversy in our school community” and such controversy would “hinder the work we are doing related to the NYSED Diversity, Equity, and Inclusion (DEI) initiative.”

Looking back, Hughes said “this was not the right decision for me to make.” The superintendent added that he admired Johnson for demonstrating “great courage and honesty” in sharing his struggles.

Hughes also mentioned Johnson’s TikTok videos. Noting that while “social media can be a powerful and effective tool for change,” Hughes added that it can “also distort reality and be very destructive.” He asked people to “keep this in mind” when reading news articles about the incident.

I reached out to Tully Central Schools for comment on this article but didn’t receive a response.

Hughes closed his remarks saying he was happy to read in Johnson’s “Senior Spotlight” answers that the teen felt embraced by the Tully community.

On Monday, Hughes issued a follow-up community letter underscoring that the decision to edit Johnson’s answers had been his and that Principal O’Brien was “simply doing what I asked him to do.”

Hughes states that he has “reversed that decision” and Johnson’s “Senior Spotlight” will be in the next issue of the school newsletter. Repeating his regret over his initial decision, Hughes also announced he’d like to apologize to Johnson in person for the situation.

In an interview with Syracuse.com on Tuesday, Hughes said that he made the decision and now feels “it was the wrong one.” He explained his rationale was to “stay neutral” in the newsletter as it “goes out to the entire community.”

“My intent wasn’t to make anyone upset,’’ Hughes said. “We are a small school district and community, and we want to include and embrace everyone. If someone doesn’t feel we are doing that, we have a lot of work to do.”

He also admitted there is no policy prohibiting mention of “sexuality, orientation, religion, or illegal drugs” in the school newsletter.

I contacted Tyler Johnson who told me, as far as he knows, “the ‘policy’ that Mr. O’Brien referred to was 100% made up by him.” Johnson feels that the community letters that have been issued were full of things “they want to say to cover their backs.”

He also shared that while Principal O’Brien “has been very silent about this issue,” Johnson says he’s determined to be “the last student this ever happens to.”