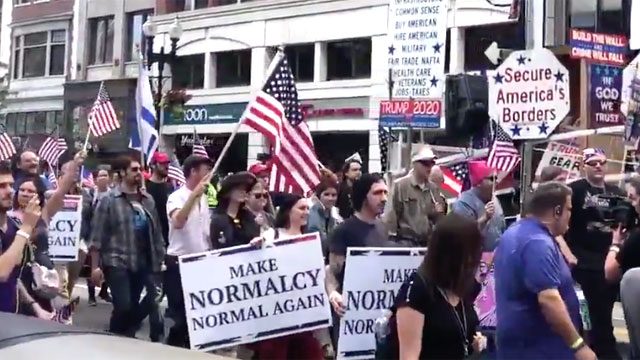 The folks who created the sad failure that was the Boston ‘Straight Pride Parade’ this past August are planning another shindig to take shots at the LGBTQ community.

Alt-right hate group Super Happy Fun America posted an announcement on their Facebook page they will be heading down to Dallas, Texas, on November 16 to hold a ‘March’ they say will “bring awareness to the fact that we as the American people are allowing our values and morals to be compromised!”

“We need to stand up and stop this from happening!!!,” continues the post complete with 3 exclamation points. “NO MORE COMPROMISE!!!!”

Four exclamation points and all caps must mean they really, really mean it!!!!

The title of the event seems to be ‘Protect Our Next Generation.’

From what you may ask? Well, the list of topics planned for discussion include:

• Sex/Human Trafficking
• Legalized Prostitution
• Marriage values (One man and one woman)
• Abortion (It is murder)
• Genders (There are only two; XX as female and XY as male)
• Ploys of the RADICAL left-wing LGBTQ groups trying to shut down our businesses and churches.
• Drag Queen Story Times (Stop pushing this onto our children)

“Straight people are an oppressed majority,” says John Hugo, president of Super Happy Fun America. “We will fight for the right of straights everywhere to express pride in themselves without fear of judgment and hate.”

He adds, “The day will come when straights will finally be included as equals among all of the other orientations.”

Because nothing says ‘oppressed’ like being over 90% of the population.

Of course, the initial ‘Straight Pride Parade’ in Boston was a huge failure with only a couple hundred supporters showing up. The parade-goers were actually outnumbered by 1,000+ pro-LGBTQ counter-protesters.

And then there’s the Modesto, California, ‘Straight Pride’ event that flopped bigly in August drawing only about 20 attendees. As in Boston, they were outnumbered by hundreds of counter-protesters.

Those folks couldn’t get a permit to hold their rally in a city park, so they did their thing in front of a Planned Parenthood.