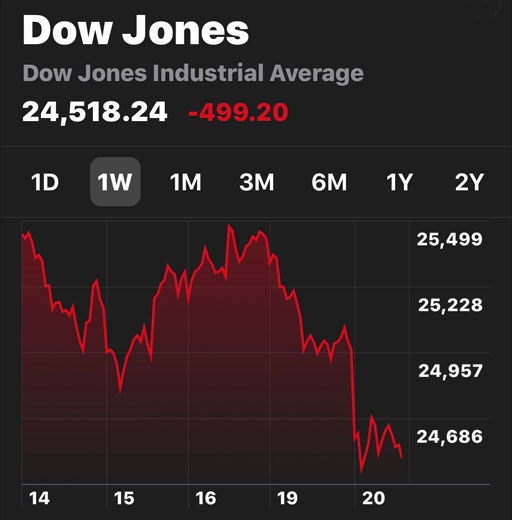 Target fell 10.4 percent after reporting weaker-than-expected earnings for the previous quarter. The company also posted lighter-than-forecast same-store sales, which is a key metric for retailers.

Tuesday’s decline came a day after members of the popular “FAANG” trade —Facebook, Amazon, Apple, Netflix and Google-parent Alphabet — all closed in a bear market, down more than 20 percent from their 52-week highs. The S&P 500 and Nasdaq dropped 1.7 percent and 3 percent, respectively, on Monday while the Dow fell 1.6 percent.

Experts point to Donald Trump’s trade wars, a slowdown in the global economy and the recent cloud that’s hung over Big Tech stocks for the decline.

That said, most say the actual fundamentals of these stocks are solid, but that doesn’t seem to matter to investors today.

Stocks are opening sharply lower on Wall Street as a rout in major technology companies continued.

The early drops put major indexes back into the red for the year. https://t.co/hvztlJZrY8 pic.twitter.com/2muQr838zB

When Wall Street wipes out a year’s gain, Donald has nothing to brag about it. His recession is starting. https://t.co/oeka7LSklW