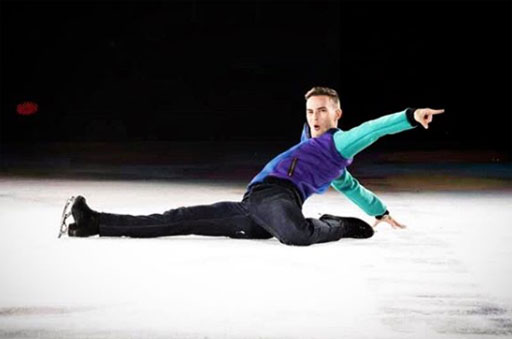 The 29-year-old skated into our hearts as he competed at this year’s Winter Olympics in South Korea becoming one of the first openly gay U.S. athletes to compete at an Olympic Games.

His athleticism and artistry on the ice was a huge factor in Team USA taking home a bronze medal in the team event.

But it has been his winning personality that has made him a fixture in pop culture. His fabulosity translated easily to the dance floor as he dominated and won this year’s Dancing with the Stars competition.

Rippon announced his departure from competitive skating in a letter shared with CBS’ Note To Self.

Addressing ‘younger Adam’ in 2014 when he had failed to qualify for the Olympic team, he acknowledges the rough road ahead.

“You are going through a really tough time right now. You’ve just missed qualifying for the Olympic team for the second time in a row. You feel confused and you feel like a failure. It might not make sense right now, but this is truly one of the most important moments in your life,” writes Rippon.

But the next paragraph contains just one sentence: “Take a moment and be proud of yourself.”

He goes on to list the many hardships that training for figure skating held for him. From traveling away from his home and living with different families to having to decide during difficult times whether to pay for ice time or groceries.

Acknowledging all those outside factors, Rippon comes back to the internal, writing, “You work so hard, but you are even harder on yourself.”

Then, it’s time for a little personal intervention.

“Stand up, walk to a mirror, look yourself straight in the eye and tell yourself: you are a winner,” he writes. “You won’t see one looking back at you yet, but do this every day and you’ll really start to learn what being a winner is.”

“Being a winner is a mindset.”

Rippon also shares the coming out process with his younger self sharing out “It made you feel so free, like you’ve grown wings.”

“When you publicly come out in the next year, you will let go of what other people think of you,” he continued. “You will hope to give someone else what you didn’t feel growing up: permission to be themselves.”

And then he adds those oh-so-important words: “You are worthy.”

But our Adam wouldn’t be ‘Adam’ without a bit of sass, so grooming comes into the mix as he advises, “Oh, and when you wax your eyebrows, start talking about how great they look. It’ll be a hit.”

He shares how the upcoming years will see him in the best mental and physical shape of his life after shifting his perspective from ‘changing’ himself to ‘perfecting’ himself.

He continues as he recounts winning the national figure skating championship, the accident where he would break his foot making his journey to the 2018 Olympics that much harder, and then the goal of a lifetime as he makes Team USA and participates in the 2018 Winter Games.

“It’ll be crazy, wild, emotional and very exciting,” pens the now-world famous athlete. “The world will see your character and they will embrace you for just being yourself.”

He saves the most important message for last, as he concludes, “You are a man now. You’ve challenged yourself and taken risks.”

Our Olympic hero signs off with a simple encouragement: “Now go out and conquer the world.”

Read Adam’s full letter to his younger self here.