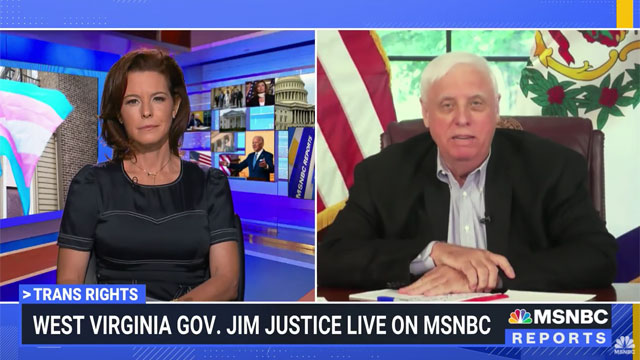 This is a pretty brutal, but fair, take down by MSNBC’s Stephanie Ruhle on the topic of all those state’s currently banning transgender girls from playing sports in public middle schools, high schools, and universities.

West Virginia Governor Jim Justice just signed such a bill into law, and Ruhle brings some direct questions to the table.

“The law you just signed, bans transgender female athletes from playing on women’s school sports teams,” she began. “Can you name one example of a transgender child, trying to gain an unfair competitive advantage at a school, there, in West Virginia?”

The governor was at a loss to do so. “Well, Stephanie I don’t have that experience exactly to myself, exactly, right now.”

“No, not yourself,” Ruhle pressed. “Your state. Can you give me one example of a transgender child trying to get an unfair advantage? Just one, in your state. You signed a bill about it.”

“But sir – you have no examples of this happening,” countered Ruhle. “Why would you take your time to do this? Let’s talk about other things that I can give you examples of in your state. According to US News and World Report, West Virginia ranks 45th in education, 47th in health care, 48th on the economy, and 50th in infrastructure. If you can not name one single example for me, of a child doing this, why would you make this a priority? I just named four things that would seem to me like a much bigger priority.”

Justice attempted some lame babble praising girls who work so hard at their sports and they shouldn’t be disadvantaged by trans girls participating. He also said he thinks “there are only 12 kids in our state that are transgender-type kids.”

Ruhle wasn’t impressed. She ended the segment with this coup de grâce:

“Please come back, when beyond anecdotal feelings as a coach, you can show me evidence where those young women are being disadvantaged in your state because I can show you evidence how ranking that low in education is a disadvantage for young women and men in West Virginia.”

Annnnnnd, curtain. Watch the exchange below.