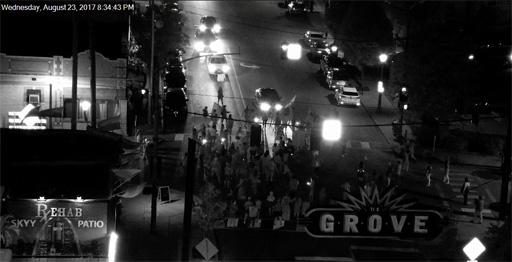 The St. Louis man, Mark Coloa, who drove his car through a throng of protesters Wednesday night has been arrested and charged with a felony count of resisting arrest by fleeing and two misdemeanor charges of leaving the scene of an accident and operating a vehicle in a careless and imprudent manner.

From the St. Louis Dispatch:

Colao pushed his car through the protesters, he gave the middle finger to a police officer who pulled alongside his car, and “accelerated aggressively” as he left the scene, according to charging documents.

He initially refused to stop for officers, police say. They caught up to him after he “violently applied his brakes” to avoid striking traffic several blocks away, at Chouteau Avenue and Grand Boulevard, where he was arrested, according to police.

The protesters had come from an evening vigil remembering Kiwi Herring, a transgender woman who was shot and killed by police after she allegedly cut a police officer with a knife.

Watch the surveillance video below.