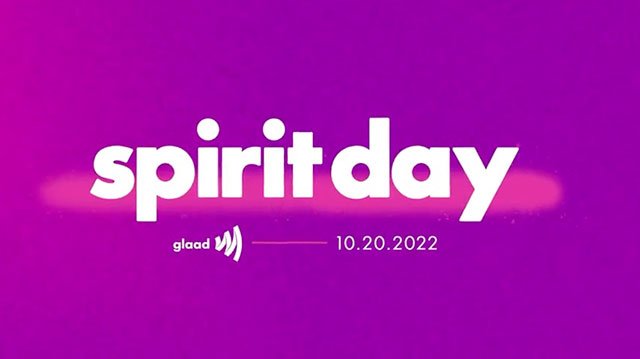 Spirit Day began in 2010 by GLAAD and then-high school student Brittany McMillan, in memory of the LGBTQ youth who died by suicide.

McMillan encouraged her friends to wear purple on a day in October — a day that came to be known as Spirit Day. Purple symbolizes spirit on the rainbow flag.

Since the inaugural Spirit Day in 2010, GLAAD organizes hundreds of celebrities, media outlets, brands, landmarks, sports leagues, faith groups, school districts, organizations, colleges and universities in what has become the most visible anti-LGBTQ bullying campaign and united show of support for LGBTQ youth.

Hosts of CNBC, “TODAY,” the 3rd Hour of “TODAY” and “TODAY” with Hoda & Jenna, Univision’s “Despierta America,” “The Kelly Clarkson Show,” “Wake Up with Cheddar,” and Cheddar News’ “Trending” have all participated by wearing purple and speaking about Spirit Day on-air.

NFL Media produced a PSA with GLAAD emphasizing the importance of taking a stand against bullying and discrimination against LGBTQ youth.

Today, LGBTQ youth, and especially trans and nonbinary youth, are experiencing a level of scrutiny in schools we have never seen, leading to an environment rife with stressors beyond the peer-to-peer bullying of the past.

From book bans, to bans on trans youth in sports, to bathroom restrictions and teachers barred from using correct pronouns, the means by which a student can express themselves and see others like them are increasingly being challenged.

Earlier this year, The Trevor Project reported 85% of transgender and nonbinary youth say that recent debates around anti-trans bills have negatively impacted their mental health.

For more information about Spirit Day head over to GLAAD here.

We are proud to support LGBTQ+ youth and stand against bullying, today and every day. #SpiritDay pic.twitter.com/4DskbTYcrt

Thank you @KelloggsUS for your ongoing support of #SpiritDay, our campaign to support LGBTQ youth. The new limited-edition Rise & Kind cereal boxes are iconic. Show your support by wearing purple on 10/20. pic.twitter.com/fcfJ4xFBcf