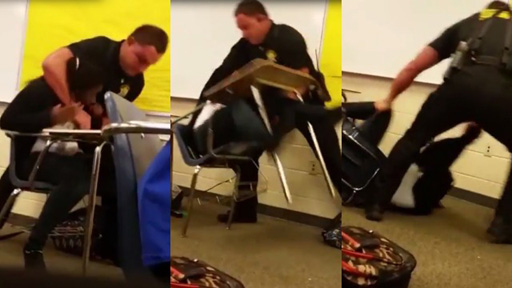 A high school student in Columbia, South Carolina, was arrested and held on $1,000 bond for filming a school officer physically abusing her classmate.

The high schooler was charged with – get this – “disturbing school.”

Niya Kenny, 18, told WLTX she was shocked and disturbed when she saw Officer Ben Fields flipping her female classmate out of her desk and pinning her to the ground for refusing to leave class.

“I was screaming ‘What the f, what the f is this really happening?’ I was praying out loud for the girl,” Kenny told WLTX. “I just couldn’t believe this was happening I was just crying and he said, since you have so much to say you are coming too. I just put my hands behind my back.”

The video, posted Monday by New York Daily News writer Shaun King, shows Fields wrapping his arms around the neck of the pony-tailed girl. He then flips her desk over backwards and throws her onto the ground, saying “put your hands behind your back.”

Kenny said her classmate is only about 5’6″ and said she never saw anything like it before.

“A man used that much force on a little girl, a big man, like 300 pounds of full muscle,” Kenny told the station. “I was like no way, no way, you can’t do that to no little girl.”

According to The Grio, the officer (named Ben Fields) has a history of bias against African-American students.

One student in the room tweeted about the incident:

Just to be clear, before the video, she was sitting quietly at her desk. Did nothing to provoke the officer

The officer came in because she wouldnt leave the class when the teacher toild her to. I still don’t know what she did to be asked to leave.

Some sources say the student who was thrown to the ground wouldn’t “put her phone away” when asked to by the teacher. Even if that’s the case, does that warrant this level of physical violence against a 5’6″ female high school student?

How about this – if the student wouldn’t leave, get another cop and the two could simply lift her desk and carry her out without assaulting the teenager.

And what justifies arresting the student who took the video? Other than the cop didn’t want his actions captured for the world to see?

Watch the officer flip the student’s desk over, wrestle her to the ground and then drag her. And the girl BEHIND the phone cam was the one causing a disturbance?