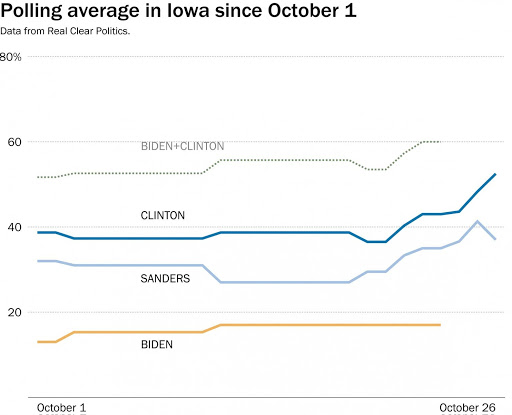 Eyebrows were raised yesterday when the results of the first Monmouth University poll in Iowa showed former Secretary of State Hillary Clinton had bounced up to an amazing 41% lead over Sen. Bernie Sanders for the Democratic presidential nomination.

If this month has been a giant, delicious cake layered with all of Hillary Rodham Clinton’s favorites, then Monmouth University just slathered on a whole lot of icing. Its new poll puts Clinton up 41 points in Iowa — the widest lead she’s seen there in any poll since June. Or: since before the Bernie Sanders surge.

It’s a good time to go back to the polling average compiled by Real Clear Politics. In an average of recent polls, Clinton is up in Iowa by a more modest 15.5 points — still more than enough to inspire a few high fives around the office in the manner of a stereotypical successful political campaign.

It’s worth noting two massive events that occurred in the past week: Vice President Biden announced he would not run for the nomination, and Clinton’s confident and commanding appearance at the congressional Benghazi hearing.