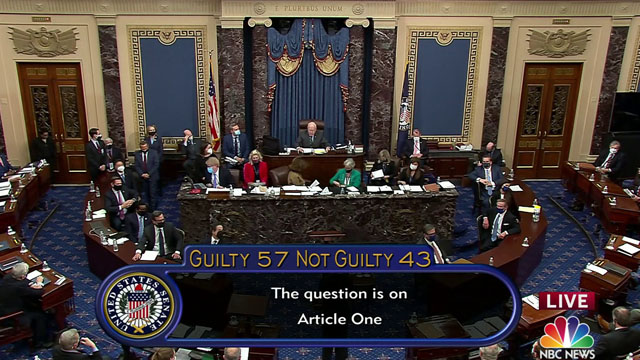 The U.S. Senate voted 57-43 against Donald Trump in his second impeachment trial. The final tally was 10 votes short of the two-thirds majority required to find Trump guilty.

Seven Republicans voted with all 50 Democrats to convict, the most bipartisan support for conviction in any of the four impeachments in U.S. history according to the New York Times.

One of the most bizarre moments of the day came when Senate Minority leader Mitch McConnell gave his closing remarks. McConnell hinted that he would’ve considered a guilty vote but is resting on the constitutional argument that Trump is a private citizen. “The question is moot because former President Donald Trump is not eligible”

But the fact of the matter is Trump was in office when the House voted to impeach him, but it was McConnell (while still Majority Leader) who refused to allow the trial to begin until Trump was no longer president.

BREAKING: US Senate votes to acquit former President Trump on article of impeachment for “incitement of insurrection.” pic.twitter.com/k3bTKNcXjQ

“Our Constitution and our country is more important than any one person. I voted to convict President Trump because he is guilty.”

BURR: “The President promoted unfounded conspiracy theories to cast doubt on the integrity of a free and fair election because he did not like the results. As Congress met to certify…the President directed his supporters to go to the Capitol to disrupt the lawful proceedings… pic.twitter.com/aBxhcIyo9K

McConnell says Trump is “practically and morally responsible” for the events of Jan. 6th—which is *quite literally* what this impeachment trial was about. Still, he voted “not guilty.”

Sen McConnell arriving at his reasoning for why he voted to acquit former Pres Trump says he believes Constitution says Congress cannot convict Trump bc he is no longer in office.

So McConnell believes it’s unconstitutional to convict Trump but he believes riot was his fault.