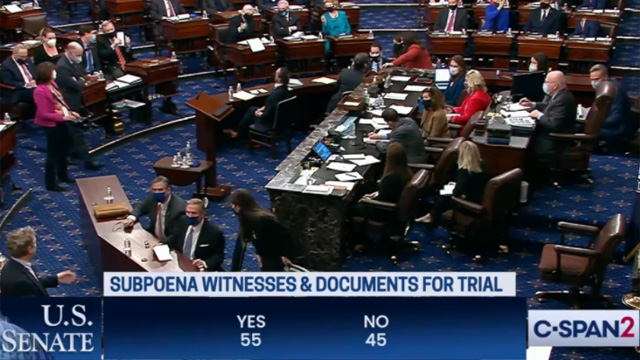 Well, here on the west coast, we woke up to the surprise news that the House Managers prosecuting the second impeachment trial of Donald Trump were going to call witnesses.

And, suddenly, it appears they’re now folded and the two legal teams are moving to closing arguments with a possible vote by the entire Senate today.

After an 11-hour scramble, the Senate has determined it will be calling no witnesses in Trump’s impeachment trial.

The written testimony of Rep. Jaime Herrera Beutler, R-Wash., — one of ten House Republicans who voted to impeach Trump — was admitted into evidence, instead of moving further with the process for hearing from witnesses.

Neither the Trump legal team nor the House impeachment managers made any further motions. The parties mutually came to the agreement to admit Herrera Beutler’s statement and not request further witnesses.

Closing arguments are underway, for which each side is allotted two hours.

There won’t be witnesses.

Democratic impeachment managers surrender their earlier demand after, remarkably, winning a procedural vote on it 55-45.

Now underway: Each side has up to two hours to make their closing arguments.

And just like that, the witness controversy is concluded. Closing arguments will play out for up to four hours — or less, if they don’t use all of their allotted time.

• McConnell tells Republican colleagues that he will vote to acquit Trump

The whole *point* of this thing was to make Republicans own every last bit of treasonous behavior they were voting to acquit. How are the Democrats this fucking bad at political analysis?