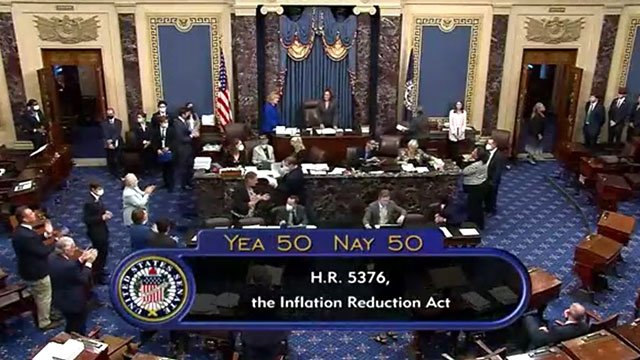 After more than a year of legislative wrangling, Senate Democrats were able to pass the Inflation Reduction Act.

The legislation is projected to lower the federal deficit by $300 billion over the next ten years and lower costs for Americans.

The Inflation Reduction Act that was passed by the Senate on Sunday could lower electricity bills for consumers and the prices of things like rooftop solar panels, energy-efficient appliances and electric vehicles, Democrats and some energy experts said. https://t.co/94sASwdAMx

The final tally was 51 to 50, with Vice President Kamala Harris casting the tie-breaking vote. No Republicans voted for the bill.

The measure, large elements of which appeared dead just weeks ago amid Democratic divisions, would inject nearly $400 billion into climate and energy programs. Altogether, the bill could allow the United States to cut greenhouse gas emissions about 40 percent below 2005 levels by the end of the decade.

It would achieve Democrats’ longstanding goal of slashing prescription drug costs by allowing Medicare for the first time to negotiate the prices of medicines directly and capping the amount that recipients pay out of pocket for drugs each year at $2,000. The measure also would extend larger premium subsidies for health coverage for low- and middle-income people under the Affordable Care Act for three years.

And it would be paid for by substantial tax increases, mostly on large corporations, including establishing a 15 percent corporate minimum tax and imposing a new tax on company stock buybacks.

During the “vote-a-rama” that took place over the past few hours, Republicans offered amendment after amendment in their attempts to further water the legislation down.

At one point, the Republicans were able to block a part of the bill that would have capped insulin prices at $35. While some of the language remains for those on Medicare, it boggles the mind that Republicans would vote AGAINST insulin price caps for Americans on private medical insurance.

During the Senate’s debate of the Inflation Reduction Act today, Dems tried to cap price of #insulin at $35. 60 votes needed, got 57 because Republicans opposed it. GOPers singled out the life-saving measure expressly to “deny Democrats a victory” at a cost of American lives. pic.twitter.com/OzaDskHeQp

If you or someone you know someone who relies on insulin, you should know that Republicans just stripped the $35/month insulin price cap from the Inflation Reduction Act. They just voted AGAINST lower insulin prices.

Republicans have spent the last year using filibusters to block many components of the legislation originally dubbed the “Build Back Better” Act. But Democrats were able to work with the Senate’s special budget rules to pass as much of the domestic agenda as they could with the support of all 50 members of their caucus.

The House has announced plans to interrupt its summer break and return to Washington, D.C. on Friday to vote on the measure. Upon its passage, it will be sent to President Biden for his signature.

NEW: The Senate passes the Inflation Reduction Act 51-50. This bill is the biggest climate investment in US history, allows the gov’t to negotiate lower drug prices, imposes a 15% minimum corp tax and beefs up IRS enforcement for tax cheats.

Not a single Republican voted for it.

Today, Senate Democrats passed the Inflation Reduction Act, siding with American families over special interests, voting to lower the cost of prescription drugs, health insurance, and energy and reduce the deficit while making the wealthiest corporations pay their fair share.

Statement by President Biden on Senate passage of the Inflation Reduction Act: pic.twitter.com/Dstk783CNy

Here’s what’s in it for you: pic.twitter.com/DtK2pEJnRG