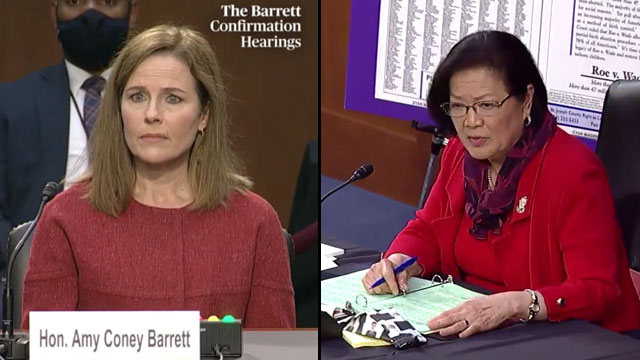 During Day Two of the confirmation hearings for Judge Amy Coney Barrett to the Supreme Court, Sen. Mazie Hirono (D-Hawaii) took time to point out Barrett’s use of the term “sexual preference” when mentioning the 2015 SCOTUS decision in Obergefell v. Hodges, which brought marriage equality to the entire nation.

Hirono accurately called out the use of the term used by many anti-LGBTQ activists.

“Not once but twice you used the term ‘sexual preferences’ to describe those in the LGBTQ community,” said Hirono. “Let me make clear, ‘sexual preference’ is an offensive and outdated term. It is used by anti-LGTBQ activists to suggest that sexual orientation is a choice.”

“That sexual orientation is both a normal expression of human sexuality and immutable was a key part of the majority’s opinion in Obergefell,” added the senator. “Which, by the way, [Justice Antonin] Scalia did not agree with.”

Barrett later apologized saying she “would never mean to use a term that would cause any offense in the LGBTQ community.”

Let me make clear – sexual preference is an offensive and outdated term.

To suggest sexual orientation is a choice? It’s not. It’s a key part of a person’s identity.

The LGBTQ+ community should be concerned with #WhatsAtStake with Judge Barrett on the Supreme Court. pic.twitter.com/4TWyATMX0Y