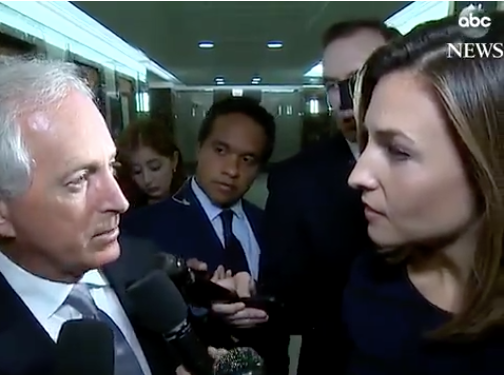 Speaking to reporters this morning, Republican Sen. Bob Corker of Tennessee was asked by Mary K. Bruce of ABC News if he felt Donald Trump was “debasing” the United States with his behavior.

Corker was unequivocal in his response: “I don’t think there’s any question.”

In the same interview, Corker said he had hoped Trump would “rise to the occasion as president to lead our nation, instead of dividing it.”

.@marykbruce: “You think the president’s debasing the nation?”

In another interview with CNN, Corker had much more to say, including:

“I would hope the staff over there would figure out ways of controlling him when they know that everything he said today was absolutely untrue.”

“The President has great difficulty with the truth. On many issues.”

“I don’t know why he lowers himself to such a low, low standard, and debases our country in a way that he does, but he does.”

“I think world leaders are very aware that much of what he says is untrue.”

Clearly, the Trumpster was watching. Check out the Twitter rant below from Trump this morning.

File this one under “Infighting is funny.” It’s obvious that Corker, who has announced he will not seek reelection next year, has zero fucks left to give about the Trump presidency.

…Corker dropped out of the race in Tennesse when I refused to endorse him, and now is only negative on anything Trump. Look at his record!

Isn’t it sad that lightweight Senator Bob Corker, who couldn’t get re-elected in the Great State of Tennessee, will now fight Tax Cuts plus!

Sen. Corker is the incompetent head of the Foreign Relations Committee, & look how poorly the U.S. has done. He doesn’t have a clue as…..

…the entire World WAS laughing and taking advantage of us. People like liddle’ Bob Corker have set the U.S. way back. Now we move forward!