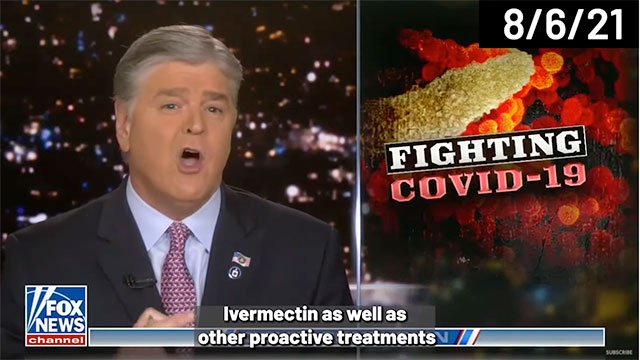 On his radio show Friday, conservative political pundit Sean Hannity claimed he never promoted the use of ivermectin in treating COVID-19.

Sean Hannity repeatedly promoted ivermectin as a treatment for COVID-19. Now that a major study has shown that ivermectin is ineffective against COVID-19, he’s lying to his audience about what he said. https://t.co/X6J06MaSdh pic.twitter.com/LNG5LemIxA

“People wrote this story, by the way, that I had been telling people [to use] ivermectin,” Hannity said on the air Friday.

“Linda, is that not the one thing that I kept saying, there’s not a single study that I’ve seen that shows that it works?” Hannity queried his producer on his syndicated radio show.

“One hundred percent,” she answered.

This is the same guy who flip-flopped on the severity of the coronavirus pandemic after a stock market crash scared him into promoting the vaccines.

In the video below, Media Matters begins with his recent statement followed by a super-cut of the times Sean Hannity brought up using ivermectin for treating COVID-19, and it wasn’t “there’s not a single study….”

It does not matter they will believe him!! Even though they know he’s lying.

Hannity’s new lie is that he warned his audience about ivermectinhttps://t.co/655V5i2F8A