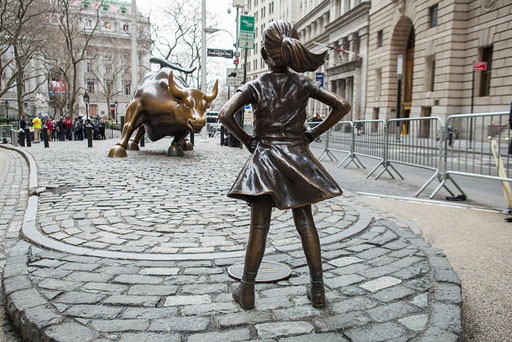 Just about everyone is loving the “Fearless Girl” sculpture now on display in lower Manhattan in the Wall Street district.

Well, everyone but the sculptor of the “Charging Bull,” who says the installation of the “Fearless Girl” has changed the meaning of his work, and is a violation of his legal rights.

The city’s ruling to let the bronze depiction of a defiant girl remain until February 2018 just feet from the bull’s flaring nostrils should be reviewed, said a lawyer for sculptor Arturo Di Modica.

“How did the process happen and should permits be revoked?” the attorney, Norman Siegel, said in an interview on Wednesday, adding that his client ought to have been consulted.

“He should have been asked, never was,” Siegel said. “There are copyright and trademark infringement issues.”

Di Modica told a news conference he envisioned his statue as a positive symbol, but that the addition of the courageous girl turned his bull into a villain.

“It’s really bad,” Di Modica said, sounding distraught and adding that the bull was loved by people “all over the world.”

The 50-inch (127-cm) girl stands fists on hips on a cobble stone plaza, eye-balling the 11-foot (3.4-meter) bull that has occupied the space in Manhattan’s financial district for nearly three decades.

Siegel said they want the girl sculpture moved and for Di Modica to be awarded damages for the violation of his legal, statutory rights.

Mayor Bill de Blasio responded to the story tweeting, “Men who don’t like women taking up space are exactly why we need the Fearless Girl.”

Men who don’t like women taking up space are exactly why we need the Fearless Girl. https://t.co/D2OZl4ituJ