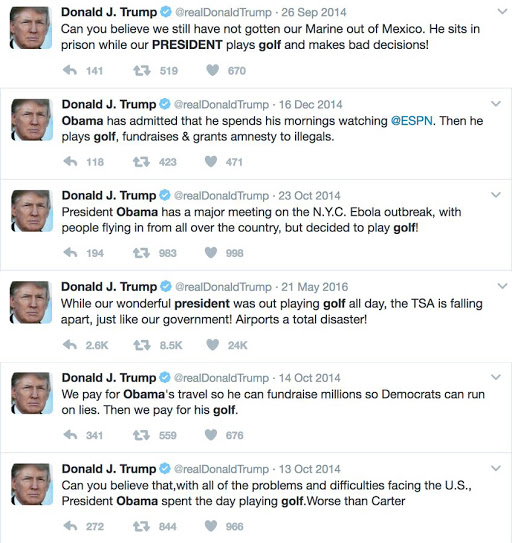 It’s the weekend, which means President Trump is more likely than not on a golf course.

As a matter of fact, Trump has taken 19 trips to a golf course since his inauguration.

Personally, I wouldn’t care about Trump’s golf habit had it not been such a sticking point for the Trumpster to continually criticize President Obama for playing golf during his presidency.

Additionally, Trump spent many a tweet on ranting about Obama’s travel costs to the American taxpayer.

And yet, it’s turning out that Trump is the one running up a hefty travel bill being paid by his constituents.

On top of his many trips to his Florida resort Mar-a-Lago, he’s making money charging the U.S. Secret Service to follow him.

CBS News reports that Trump has invoiced the Secret Service over $35,185 for golf cart rentals so the agents could keep him safe on the golf course. Those are HIS golf carts he’s renting out.

In related news, taxpayers have paid over $190,000 just to provide security for Trump spawns Don Jr. and Eric as they travel the world on business.