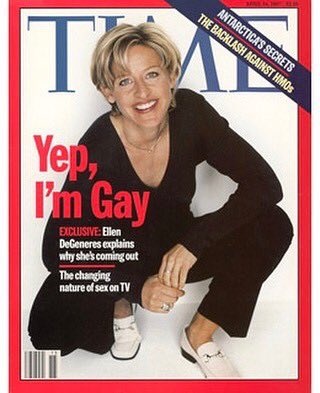 It was 20 years ago this week that Ellen DeGeneres made history by coming out on her primetime sitcom.

In doing so, she became the first openly gay lead character on American network television.

You may have noticed the sky never fell 🙂

TIME.com shares her 1997 cover story interview, and it’s well worth the re-reading.

As we all know, while coming out did bruise Ellen’s career for a period of time, it’s clear she (and a more enlightened America) have the last laugh.

Just last year, she received a Presidential Medal of Freedom in part for that courageous, groundbreaking moment of self-truth in 1997.