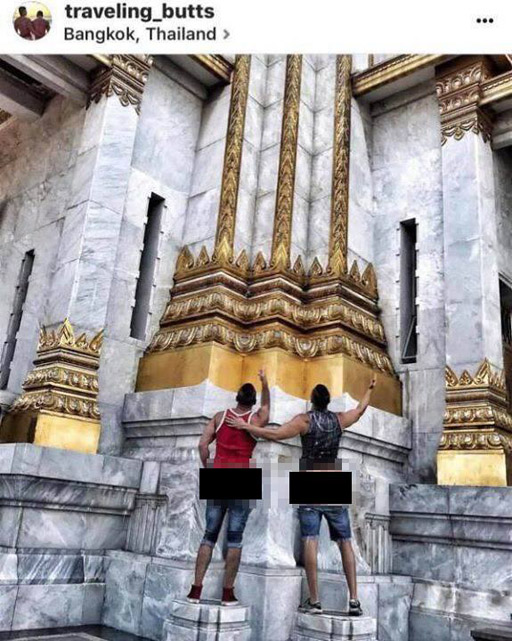 I think this kind of stupidity is pretty rare.

Now, their little hobby has landed them in a Thailand jail with a possible “long jail term” ahead of them.

From CBS8 in San Diego:

The San Diego couple known as Traveling Butts on Instagram has more than 14,000 followers on the social media platform. Their photos showcase themselves posing with their naked rear ends in front of landmarks across the globe.

Their most recent posts in front of Buddhist temples sparked outrage on social media after people called them ignorant and disrespectful.

The couple’s friend M.G. Perez said “They are a thing. They are hot on Instagram and on social media.”

After the pair posed in front of sacred Buddhist temples, they landed in hot water with police in Thailand.

Perez believes the two are in a Bangkok jail after seeing an alarming message on Facebook. “It says, ‘anybody have any connections with diplomats in Bangkok or know a lawyer in Bangkok?’ That was my wake up call. Like, ‘Travis, what is going?’”

Ti and Dasilva posted their location at a Bangkok police station informing their friends they might soon be arrested while pleading for help.

After one of the men wrote “I don’t know how much longer I’ll have my phone,” the couple went dark.

Of the risqué photographs Ti and Dasilva took in front of the temples, he said, “It is in no way any form of disrespect. It’s just their expression.”

Sen. Dianne Feinstein’s office has apparently been contacted for aid in regard to having the idiots freed.

No sympathy from me. When you travel abroad, you have to respect the laws and traditions of that country. Period.

A gay American couple who author the Instagram page “Travelling Butts” has been arrested at Don Mueang International Airport for having taken photos showing their backsides with the respected Temple of the Dawn. A deputy spokesman for the immigration police said the charge would not be a normal public indecency charge. Instead, they would be charged with committing indecency in a place of worship, which carries a long jail term.This is a reminder that everyone should have respect for Thai religion and culture.