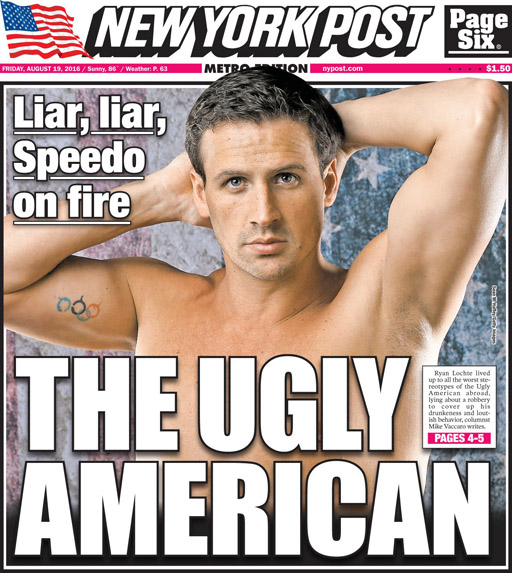 Sometimes, as I’ve traveled overseas, I’ve been troubled by that notion, of the assumption of the Ugly American. I’ve thought it a cartoon, a caricature, whose time was surely over.

And then, sometimes, you see someone like Ryan Lochte open his mouth.

And when you hear what comes tumbling out, it all makes perfect sense.

That’s the worst part of what Lochte and his stable of stumble-bumbling swimmer pals have done the past few days, now that it’s apparent that whatever might have happened to them late one night — actually, early one morning — in Rio, it wasn’t exactly the way Lochte described it the first time around.

In fact, it seems apparent that Lochte and his cohorts in chaos — Jack Conger, Gunnar Bentz and Jimmy Feigen, all swimmers representing the US in a decidedly different way than Katie Ledecky and Michael Phelps did — were using the old “robbed-at-gunpoint” chestnut as cover for what was apparently a gas station encounter with a security guard and, quite hilariously, a bathroom door.

The Ugly American is alive and well in 2016 thanks to this dope. Thanks for that, Ryan. Now don’t let the bathroom door hit you on the ass on your way to Palookaville.