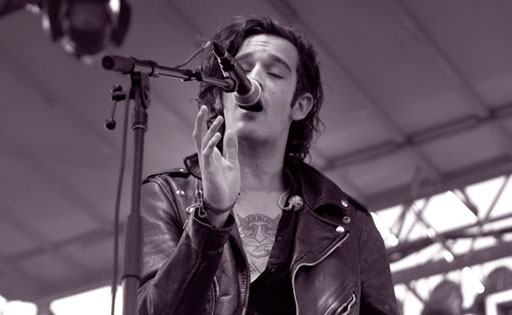 Matt Healy, lead singer for the UK band The 1975, responded to a male fan’s request to “marry me” by heading into the crowd and laying some lip-lock on the fan during the band’s first-ever concert in Dubai.

Billboard reports the moment happened during the performance of the band’s song, “Loving Someone.”

As he returned to the stage amid loud cheers from the crowd, Healy said, “I love you, bro – we’re all human, right?”

The kiss was noteworthy not only for the artist/fan interaction but also due to the severe anti-homosexuality laws in the United Arab Emirates where being gay is punishable by up to ten years in prison.

Even so, the crowd was thrilled.

matty healy really gave a speech about acceptance, played “loving someone” (lgbt anthem), and went down to the crowd and kissed a guy on his lips after he asked matty to marry him all in dubai where being gay is illegal pic.twitter.com/B48fkbO9hp

At another moment during the concert, Healy stopped to speak directly to the adversity LGBTQ people face in the Arab country and acknowledged the risk he faced even addressing the subject.

“I just want us to identify as humans and not as groups of individual different people,” he told the crowd. “I’m sorry, I know it seems indulgent for me to cry but I do this every night and it’s the same thing, I see so much passion and pain, and I know what you guys are going through and I know you’re not representative of your governments.”

Literally my favorite moment during The 1975’s concert in Dubai! Ily @Truman_Black @the1975 😘♥️ pic.twitter.com/RIazv646DL

WOKE KING! Thank you for always making the LGBTQ+ family feel welcome no matter where we are ❤️🏳️‍🌈

thank you for everything. You made it matter. Your words gave us all a sense of belonging and welcoming that were deprived of. That you for pointing out that we matter. I love you.

thank you for everything. You made it matter. Your words gave us all a sense of belonging and welcoming that were deprived of. That you for pointing out that we matter. I love you.

In conclusion, we stan harder than ever before— ange (@insideyourhann) August 15, 2019

The band, which won Best Album and Best Group at this year’s Brit Awards, has seen all three of their studio albums hit number one on the UK charts.

At the time, Healy told The Observer, “You might wonder why it is needed, and even ask yourself what exactly is everyone still scared of, but sadly, I think stigma still exists even in London and we still have some way to go.”

After the Dubai concert, Healy took to Twitter to say he “wouldn’t have done anything differently given the chance again.”

Thank you Dubai you were so amazing. I don’t think we’ll be allowed back due to my ‘behaviour’ but know that I love you and I wouldn’t have done anything differently given the chance again

While many applauded the display of support, some on social media expressed concern that the public same-sex kiss could put the fan in jeopardy under the laws of his country.

Are you not concerned about any danger you’ve put him in?! What about his family / friends / job? You’ve just got him to commit a crime on camera n then what?? Any support afterwards for any potential reprecussions or?

Matty, I know you had good intentions for kissing the fan in Dubai, But please check on him he might get in trouble with the government and poissbly go to jail for ten years. Love you lots.

Earlier this month, I reported a shared kiss between bandmates of the heavy metal group Rammstein during a concert in Russia. That kiss was also seen as a protest of the anti-LGBTQ ‘propaganda’ laws there.