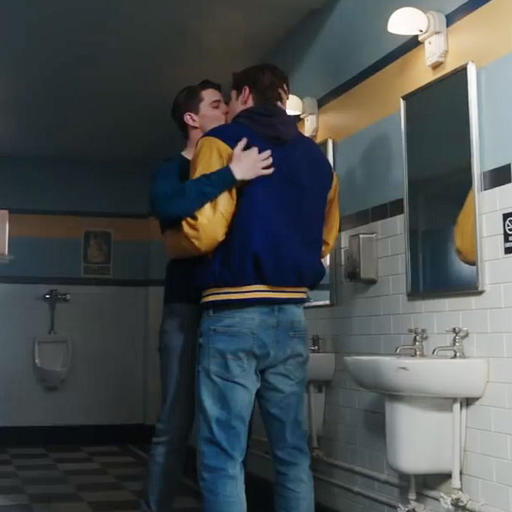 The CW dropped a new trailer for the upcoming third season of Riverdale at San Diego Comic Con over the weekend.

While the three-minute video recapped some of last season, there was some new footage and it appears that two male characters are headed for Romance-ville.

You may recall that in the pilot of the series, “Kevin” and “Moose” had a bit of a late-night tryst. But nothing really came of that as Moose stayed loyal to girlfriend Midge.

Well, until she was murdered, and a grieving Moose sought comfort in Kevin’s arms and a make-out session in the high school bathroom.

In May, creator and showrunner Roberto Aguirre-Sacasa told EW that a men’s room kiss between Kevin Keller and Moose could become “more than just a moment of passion:”

“My hope is that it continues. It’d be nice to see Kevin in a romance again. But they’ve got a big cloud looming over them, which is the death of Midge. Which is kind of par for the course on Riverdale. But I’m rooting for them. I hope it’s more than just a moment of passion.”

In another statement, Cott shared, “I think making out in the bathroom cemented us as a ‘thing.’ We’re trying to push Moose in the right direction [in terms of him being out].”

And there’s more in the LGBTQ news as the new trailer features a two women kissing, and Aguirre-Sacasa has teased that there will be “an unlikely romance for Reggie starting in Episode 3.”