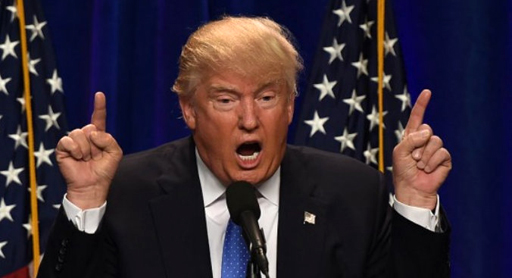 Donald Trump shocked many last night as he tweeted a full-on, caps-lock threat to Iran.

Rouhani went on to warn Trump to stop “playing with the lion’s tail” and threatening Iran, “or else you will regret it.”

And so, the Trumpster’s tiny fingers tapped out, “To Iranian President Rouhani: NEVER, EVER THREATEN THE UNITED STATES AGAIN OR YOU WILL SUFFER CONSEQUENCES THE LIKES OF WHICH FEW THROUGHOUT HISTORY HAVE EVER SUFFERED BEFORE. WE ARE NO LONGER A COUNTRY THAT WILL STAND FOR YOUR DEMENTED WORDS OF VIOLENCE & DEATH. BE CAUTIOUS!”

To Iranian President Rouhani: NEVER, EVER THREATEN THE UNITED STATES AGAIN OR YOU WILL SUFFER CONSEQUENCES THE LIKES OF WHICH FEW THROUGHOUT HISTORY HAVE EVER SUFFERED BEFORE. WE ARE NO LONGER A COUNTRY THAT WILL STAND FOR YOUR DEMENTED WORDS OF VIOLENCE & DEATH. BE CAUTIOUS!

It’s not clear who Trump was trying to impress with his swagger as Twitter has been banned in Iran since 2009. So, the folks there weren’t reading this.

The Twitterverse immediately assumed some bad news is about to come down Trump’s pike and this was a case of ‘wag the dog.’

As we all know, Trump has tweeted the idea of threatening war with Iran as a distraction many times in the past.

Now that Obama’s poll numbers are in tailspin – watch for him to launch a strike in Libya or Iran. He is desperate.

I predict that President Obama will at some point attack Iran in order to save face!

Remember that I predicted a long time ago that President Obama will attack Iran because of his inability to negotiate properly-not skilled!

At least we didn’t get stuck with an emotional woman as president. https://t.co/FO1H3oVJTO

Narrator: he had gotten so desperate to change the topic from his betrayal in Helsinki, he was willing to start a nuclear war. https://t.co/RPbwcCvxqV

Even I know that pounding out a tweet in ALL CAPS makes you seem like a crazy, old guy… sort of like GET OFF MY LAWN, YOU RAPSCALLION!

Some Twitterers took the missive for the unhinged musing that it is and just inserted song lyrics at random:

To Iranian President Rouhani: IT’S GONNA TAKE A LOT TO DRAG ME AWAY FROM YOU THERE’S NOTHING THAT A HUNDRED MEN OR MORE COULD EVER DO I BLESS THE RAINS DOWN IN AFRICA GONNA TAKE SOME TIME TO DO THE THINGS WE NEVER HAVE