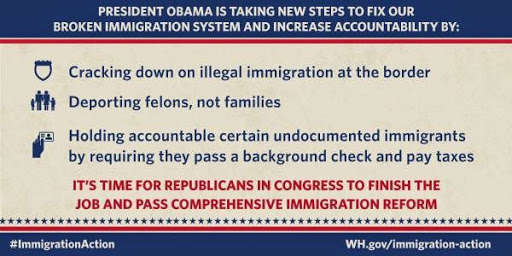 What’s laughable is how the right wing nuts are working overtime to draw a distinction between President Reagan and Bush’s executive actions on immigration and President Obama’s proposed order, saying that Obama’s authority for deferring deportation — unlike that of his predecessors — is illegitimate.

Plus, it’s been over 500 days since the US Senate passed a bipartisan immigration reform bill but the GOP-led House refuses to bring the legislation up for a vote.

Had Speaker of the House John Boehner daned to bring the bill to a vote, the country would have moved forward on this issue already.

America has made it clear we are tired of obstructionism and “do nothing” Congresses. I completely support President Obama in taking whatever lawful actions he can that make sense to help cope with the country’s immigration issues.

Check the second video below where Boehner laughably talks on “working together to fix our broken immigration system.”  And yet – he has personally kept the issue from a vote in the House.