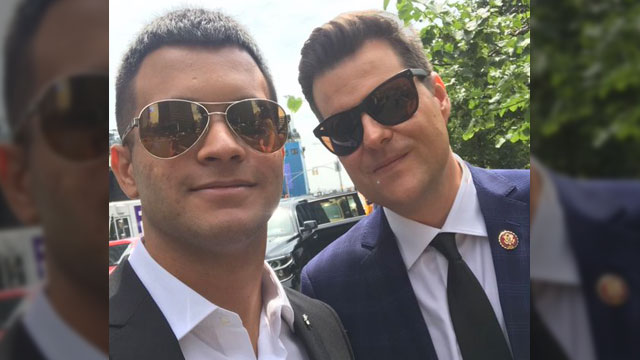 I admit, in many cases, “family” can be defined in many ways and what counts is in the heart.

But in this case, Gaetz defended his ‘outrage’ for his over-the-top reaction in a congressional committee hearing by announcing the “local student” or “helper” (his own words) is suddenly his “son,” it sure sounds like he’s using someone’s ethnicity to justify his own woeful voting record on immigration and racial issues.

Wednesday’s House Judiciary Committee hearing on police reform blew up when Rep. Matt Gaetz (R-FL) took offense at remarks made by Rep. Cedric Richmond (D-LA) about race, asking the Black congressman “who the hell” he thought he was.

The Democrat noted that he was aware that there are GOP congressmen who have Black grandchildren before pointing out that “it is not about the color of your kids” but instead about “Black males, Black people in the streets getting killed.”

“You’re claiming you have more concern about my family than I do,” the pro-Trump congressman shouted. “Who in the hell do you think you are?” After Chairman Jerry Nadler (D-NY) called on Gaetz to cease, Richmond coolly asked Gaetz, “Was that a nerve?”

The reason the story is interesting is…apparently, Gaetz (who is single) has an adopted Cuban-born son named Nestor, but no one knew this…? There’s no mention of Nestor on Gaetz’s campaign website.

Now, I don’t believe in pimping out kids for political points, but usually, on a politician’s “About” section on their website, there’s a mention of spouse and children. Nope. Not on Gaetz’s website.

Gaetz tweeted a photo with Nestor today explaining Nestor is his son, although he makes a point to say they ‘share no blood’ and Nestor came to the U.S. from Cuba (with the notation ‘legally, of course’).

But then, folks clicked back through the congressman’s Twitter feed and it turns out Nestor has made a couple of appearances in the past, but Gaetz referred to him as his “helper” in a video and in other tweets listed him as a “local student Nestor Galban” or “House page Nestor Galban.”

But never identified his son as his son?

I think that’s, umm, weird. So did some other folks.

As Boy Culture writes, “People are understandably shocked that Gaetz — who has a DUI record — was able to adopt (?) a 12-year-old boy from another country, and that he chose to keep this arrangement a secret until he felt it was politically expedient to come out of the closet … as a dad. Or a father figure. Or a ward.”

By the way, to be clear, I think adoption ROCKS. It’s just odd that Gaetz suddenly reveals this after a shouting match over non-white children…

For all those wondering, this is my son Nestor. We share no blood but he is my life. He came from Cuba (legally, of course) six years ago and lives with me in Florida.

I am so proud of him and raising him has been the best, most rewarding thing I’ve done in my life. pic.twitter.com/JB96wzOzYU

Nestor turned 19 a few days ago & will be off to University. He arrived here at 12.

As you can imagine, I was triggered when (to make an absurd debate point) a fellow congressman diminished the contributions of Republicans because we don’t raise non-white kids.

When did he go from helper to son? . pic.twitter.com/6hBMSx2d7g

Which is why he never mentioned his son’s existence until now and called him “a student” back in 2016, right?

Who are you trying to fool? pic.twitter.com/VrTT6fdXgP

I love when my Dad calls me “Local student” too. You seem close. pic.twitter.com/O09vXQ0lOg

NARRATOR: “Matt was, at first, cagey about introducing America to his boyfriend.”

Just to be clear about what’s being mocked today…
A single man adopting or fostering an older kid: Excellent.
Keeping it secret for 7 years: Weird.
Calling him your “helper” or “local student”: Creepy.
Revealing his existence only when it’s politically convenient: Contemptible.

But hey, congrats, Matt! You managed to derail the conversation about the immense danger and fear that black people—especially black men—face every day at the hands of law enforcement, & make it about you instead!

You are truly a force of white entitlement to be reckoned with. pic.twitter.com/ym3SC9G8qw