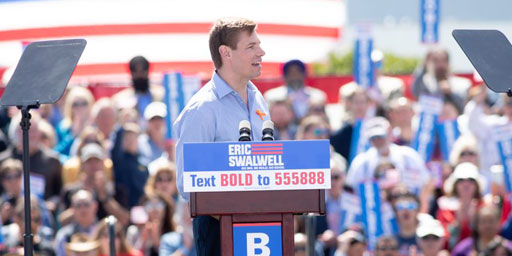 Rep. Eric Swalwell has announced he will end his three-month campaign for the Democratic presidential nomination.

In an email to supporters, Swalwell writes, in part:

I ran for President to win and make a difference in our great country — a difference on issues of the future such as finding cures for our deadliest and most debilitating diseases, taking on the student loan debt crisis, and ending gun violence.

I promised my family, constituents, and supporters that I would always be honest about our chances.

After the first Democratic presidential debate, our polling and fundraising numbers weren’t what we had hoped for, and I no longer see a path forward to the nomination. My presidential campaign ends today, but this also is the start of a new passage for the issues on which our campaign ran.

I want thank my supporters & friends, my staff, & my family for making this journey possible. I’ll never forget the people I met & lessons I learned while traveling around our great nation. Though our campaign is ending our mission to end gun violence is just beginning… pic.twitter.com/voEJRpYd2R