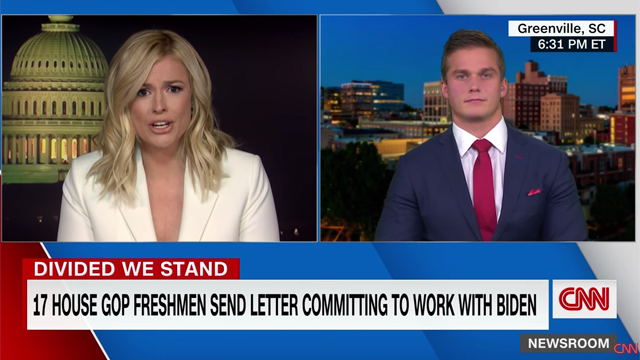 Hours after riling up Trump supporters at the now-infamous January 6 rally that led to the violent insurrection at the U.S. Capitol, freshman Rep. Madison Cawthorn (R-NC) joined fellow House Republicans in contesting election results during the certification of the Electoral College.

Cawthorn was a bit flummoxed during an appearance on CNN last night when he tried to explain his rationale for questioning the results.

“The things that I was not objecting to the election on behalf of was things like Dominion voting machines changing ballots, or these U-Haul trucks pulling up filled with ballots for Joe Biden as president,” said Cawthorn. “The thing I was objecting for is things like, like I said in the state of Wisconsin, particularly in the town of Madison … there was an appointed official in that town who actually went against the will of the state legislature and created ballot drop boxes, which is basically ballot harvesting that was happening in the parks.”

CNN anchor Pamela Brown pointed out that the Wisconsin issue Cawthorn brought up had been litigated in court and rejected by Trump-appointed judges. And that’s where Cawthorn found himself tossing word salads right and left.

“Indeed, I believe specifically, and this is the one that I debated on behalf of on the House floor, in Wisconsin that was never heard because they dismissed it because of standing,” he added. “Now I don’t believe that is a concrete enough of a way to dismiss it.”

Well, you have to have standing in order to bring a legal argument to court. That’s pretty much established…

Brown followed up asking Cawthorn for examples of ‘concrete evidence’ he’d seen of voter fraud. The 25-year-old found himself unable to cite any evidence that led him to believe there was widespread fraud.

“Like I said, that’s not the reason I contested the election,” he told Brown.

“So you wanted to throw out millions of votes without actually seeing any concrete evidence of fraud?” Brown asked. “Cause that’s what you were doing when you were contesting the election.”

“I disagree with you on that point,” and again asserted his only goal had been to “hold up the Constitution.”

Brown then shifted to Cawthorn’s own state of North Carolina which had also amended election laws due to the COVID-19 pandemic. But for some reason he appeared to be unaware that his own state legislators had done the same thing Wisconsin elected official had done.

“I’m actually not aware of the laws that were changed inside of North Carolina,” Cawthorn replied. “I believe we had a very safe and very secure election here.”

In Texas we have a saying, “All hat, no cattle.”

You can watch the full exchange above or a few clips below.

CNN’s Pamela Brown challenged Madison Cawthorn to cite evidence of election fraud to back up his vote against certifying the election results. He had nothing. pic.twitter.com/irBADDOciU

Brown points out the contradiction between Cawthorn saying he has issues with changes to election rules in Wisconsin when his own state of North Carolina made similar changes because of the pandemic.

“I’m not aware of the laws that were changed inside of North Carolina,” he says pic.twitter.com/9E6cWaBZgd