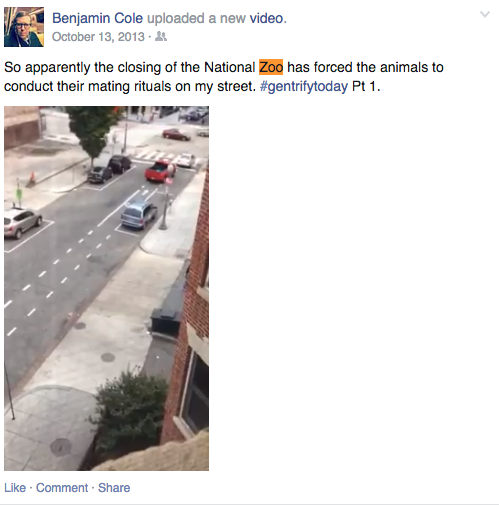 In the wake of his current Congressional decorating woes, Rep. Aaron Schock now has to deal with a PR debacle as news comes to light that his policy and communiciations adviser, Benjamin Cole, had taken to social media in the past to compare African-Americans to zoo animals.

The posts appear to have been removed this week in light of “OfficeGate.”

In a series of Facebook posts obtained by ThinkProgress, the senior adviser for policy and communications to Rep. Aaron Schock (R-IL) posted racial comments and endorsed gentrification of his neighborhood.

Benjamin Cole, a former Baptist pastor and energy industry spokesman, posted a series of videos and comments on October 13, 2013 mocking two African Americans outside his DC apartment. In the first, he compared them to animals escaping from the National Zoo engaged in “mating rituals.” That message included a video of a woman, shouting and seemingly engaged in an argument with someone not visible as she walked. In each of his posts, he used the hashtag “#gentrifytoday.”

To be honest, Cole brought this on himself not only by posting his hideous remarks but also by making himself news this week with his knee-jerk reaction to the “Downton Abbey” inspired office story. Had he handled the issue with a fairer hand, his name wouldn’t have sparked interest in the national media.

You can see the screen capture of one of the posts (before it was deleted) below:

Cole’s resignation was announced today with Schock issuing this statement:

“I am extremely disappointed by the inexcusable and offensive online comments made by a member of my staff,” Schock said in a statement to the Peoria Journal Star. “I would expect better from any member of my team. Upon learning about them I met with Mr. Cole and he offered his resignation which I have accepted.”

Glad to see Schock take the only real.