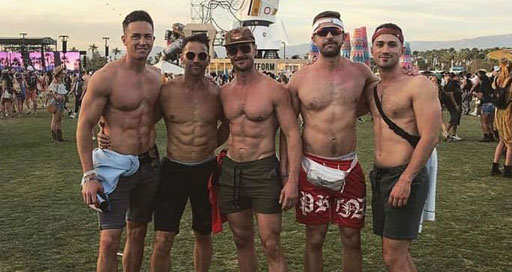 Eagle-eyed folks at Coachella this past weekend spotted ‘totally-not-gay’ former GOP Congressman Aaron Schock hanging out shirtless with a gaggle of gays.

Photos were shared in a Facebook post, Schock appeared to be having quite the time at the music festival posing shirtless with a group of men as well as looking a bit parched (or something) standing in a crowded tent (again, shirtless).

And Queerty is reporting that Schock was seen later making out with a guy as his hands were getting busy: 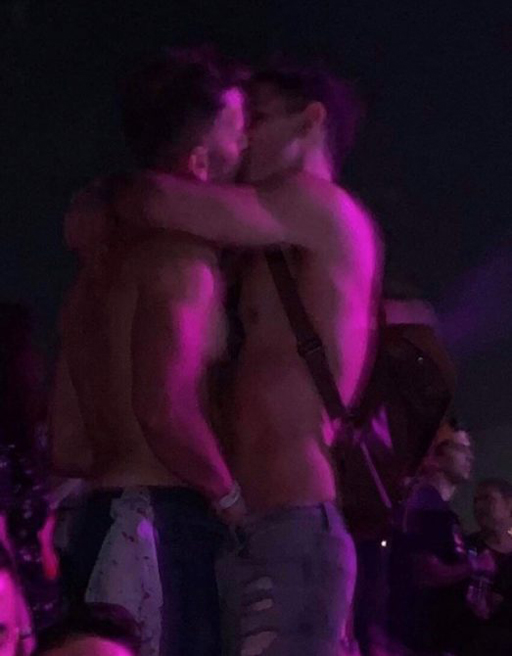 As the pics were shared across social media, several LGBTQ activists expressed their disgust that gay men would be hanging out with the former Republican congressman from Illinois who voted against LGBTQ interests during his time in office.

He had a voting record that was very anti-LGBTQ from voting against the repeal of ‘Don’t Ask, Don’t Tell’ to supporting an amendment to the Constitution that would ban marriage for gays. All that and more led to a zero rating from the Human Rights Campaign.

Before a financial scandal that promptly led to his resignation in 2015 – you may recall the Downton Abbey-inspired decor of his Washington D.C. office – Schock was making quite the name for himself posing shirtless on the cover of fitness magazines as well as traveling with his own personal photographer.

But that all went awry when he was charged with 24 counts that including wire fraud, mail fraud, making false statements, filing false tax returns and more in November of 2016. Just a few weeks ago, prosecutors agreed to drop the charges if he paid $42,000 in back taxes as well as returning $68,000 to his congressional campaign funds.

While he never came out during his time in Congress, rumors have followed the 37-year-old for years, including one from out journalist Itay Hod.

And former Rep. Barney Frank of Massachusetts (who came out in 1987) told Business Insider in 2015, “I don’t know if he’s gay or not, but if he is, he’s forfeited any right to privacy because he votes anti-gay. My view is that people who are gay who vote to support the right of other people to do it have a right to privacy, but the right to privacy does not include hypocrisy.”

“From the closet, he voted against gay marriage, against rescinding Don’t Ask, Don’t Tell and more, and then he left office due to financial irregularities that he seems to have gotten away with,” added Rettenmund.

James Duke Mason, who posted the photos to Facebook, penned this caption:

“Normally I wouldn’t comment on something like this, but I am just infuriated by these images of former Republican (and anti-gay) Congressman Aaron Schock partying with a group of gay men at Coachella. The fact that he would think he could show his face in public, particularly when he has NEVER renounced or apologized for his votes against gay marriage, gays in the military and against anti-discrimination laws is astounding. My intention isn’t to out him or target him personally, but simply to point out the hypocrisy. I saw him at a recent gay social event in West Hollywood and shook his hand before I realized who he was; he should really be ashamed of himself. And the gays who associate with him without calling him out should know better. It really is a disgrace.”

@aaronschock Are you going to publicly acknowledge your history of voting anti-LGBT now that you’re enjoying outings with your openly gay pals at Coachella?

.@aaronschock had a despicably anti-LGBTQ record in Congress. He never tried to make amends for the harm he caused. He should be ostcracized, not celebrated at #Coachella.CC: MuscleGays™️ and RichWhiteGays™️

@aaronschock looks like you had fun at Coachella with some of my fellow LGBT brothers. Where’s the apology for voting against their rights while you were in Congress???