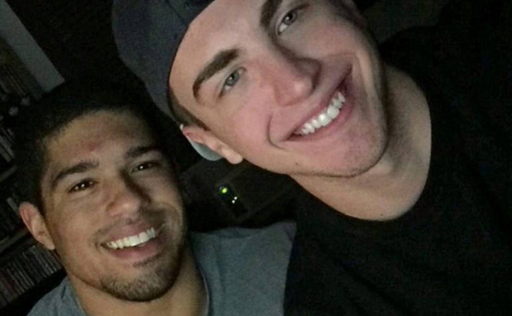 Professional wrestler Anthony Bowens has come out as bisexual, with a little help from his boyfriend, Michael Pavano.

It was this past fall and I was three months into a relationship with my boyfriend, Michael Pavano. Mike and I had uploaded a video to YouTube on his channel called “The Laughing Challenge,” where he described me as his boyfriend.

The video was a blast to do, but I worried that someone from the wrestling world would stumble across it and learn my secret. I decided to let it be posted anyway.

Weeks later, I received a text that made my stomach drop.

It was from my best friend in the wrestling business, and someone I specifically made sure to keep my secret from. The text read: “Bro, why didn’t you tell me?” I knew exactly what he meant but I played dumb. “What do you mean?” I replied. He response was that he saw “the video.”

Much to my great relief, he told me he didn’t care and that I was one of his best friends in the business.

He also said that some of the other wrestlers had watched it too and tipped him off about it. I was relieved that he was cool with everything but a bit nervous because other wrestlers knew. It was after this that I came to the conclusion that I had a decision to make.

With my closest friend in my profession being cool with my orientation and having the continued love and support from by parents and best friends, I finally felt comfortable letting the world know. On Jan. 8 this year, I sent a message on Facebook:

I’m not going to make this a long winded post but I think it’s time. Just wanted to let everyone know im Bisexual. I look forward to changing perceptions and breaking stereotypes as I continue on my journey. I have zero patience for negativity so if this bothers you please delete me. Thanks!

After hitting send, I immediately turned off my phone. I didn’t want to think about what people would write. After about 30 minutes I told Mike to check his phone. I hadn’t told him I was planning on coming out, so I wanted it to be a surprise.

He had the biggest smile on his face, our friends in the room cheered, and I made the decision to turn on my phone. The response was overwhelming positive — 986 likes and more than 200 comments, all positive; only a very few people unfriended me. I couldn’t help but cry as I let loose all of the years of stress, anxiety and fear of judgment. It was the best decision I had ever made.

As is the case most of the time, coming out has been an uplifting experience for Bowens.

Congrats to Anthony! Check him out with his adorable bf below via Instagram:

Who ever said you can’t pick up guys at the gym? Lol This was our best attempt of making fun of fitness couples. Happy Valentine’s Day @michaelpavano
A post shared by Anthony Bowens (@bowens_official) on Feb 14, 2017 at 4:44pm PST

Post match #celebration after winning the @wrestlepronj #championship @twomanagement
A post shared by Anthony Bowens (@bowens_official) on May 6, 2016 at 3:32pm PDT