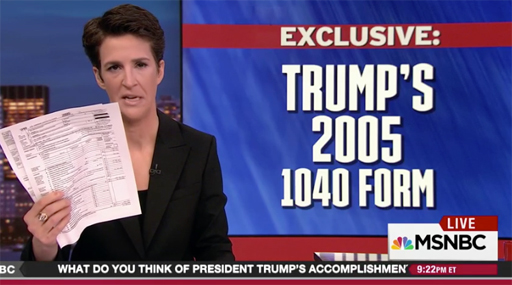 Last night, Rachel Maddow almost blew up Twitter with the news that she had in her possession “Donald Trump’s tax returns.”

In truth, it was two pages of Trump’s 2005 tax returns. The pages were sent anonymously to Pulitzer Prize winning, New York Times best selling author David Cay Johnston, who sat down with Maddow to discuss what the return could tell American voters about their new president.

The White House actually put out a statement in advance of Maddow’s show which confirmed the information.

The very short version is that Trump paid $36 million in taxes on $153 million adjusted gross income. So, about 25% tax rate. About what most middle class folks pay percentage-wise.

Reminder – Trump is the first President in four decades to refuse to release his returns, even though he promised on many occasions to do so.

For the full breakdown of the tax returns by Johnston, click here.

Watch below as Maddow and Johnston discuss the documents:

Folks are wondering where the tax return came from, and it’s been considered by a lot of folks that Trump himself, or an aide, sent the pages as a distraction from his current White House woes. As we all know, Trump used to “leak” info on himself to New York City newspapers under an assumed name often back in the 80s and 90s.

This morning, the Donald at least feigned anger tweeting, “Does anybody really believe that a reporter, who nobody ever heard of, “went to his mailbox” and found my tax returns? @NBCNews FAKE NEWS!”

Does anybody really believe that a reporter, who nobody ever heard of, “went to his mailbox” and found my tax returns? @NBCNews FAKE NEWS!

Reminder: Johnston is a Pulitzer Prize winning author with New York Times best-sellers to his credit. A LOT of folks have heard of him.

Trump fans call & harass my wife & 1 of my children after I break story White House confirmed. Sad! Let’s have open debate, not threats.

To be clear, folks, I don’t intimidate. But calls to family are out of bounds, a disturbing sign of how Trump damages civil debate.

Now. Can we get back to Trump’s allegations of wire tapping and the American Health Care Act which won’t be passing in it’s present form?