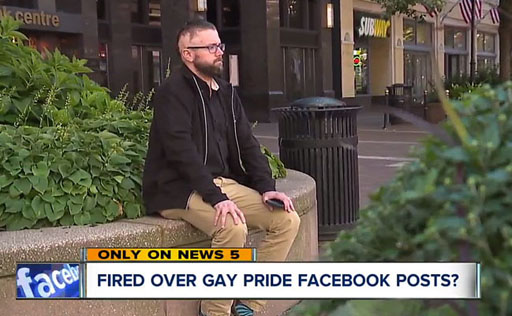 Keith Kozak, the now-former outreach minister for the Catholic Discese of Cleveland, finds himself unemployed after liking a photo of a same-sex wedding on Facebook.

Showing up for a Human Resources appointment, Kozak though the meeting would be about a promotion. Instead, he got quite the opposite.

“When they called me in, I was thinking it had something to do with that,” Kozak said. “They sat me down and they said we had seen some things on Facebook and Twitter and that would like to talk to you about that.”

The next day he received a termination letter.

The 39-year-old admits he wasn’t out at work. “I didn’t feel comfortable doing it, but I also thought it wasn’t important at the time,” said Kozak.

Saying the Church had been “very discriminatory,” Kozak took his case to the Ohio Civil Rights Commission.

But in this case, it appears the Catholic Church may be exempt from following those laws.

From the local ABC news affiliate:

While the organization didn’t specifically comment on his case, a spokesperson told News 5 the Cleveland Diocese might be within its rights, citing “ministerial exception.” It prohibits clergy members from bringing claims under federal discrimination laws because the relationship between an organized church and its ministers is its lifeblood.

For its part, the Catholic Church issued a statement saying it doesn’t make public comments on personnel decisions, but is confident Kozak’s firing was “appropriate.”