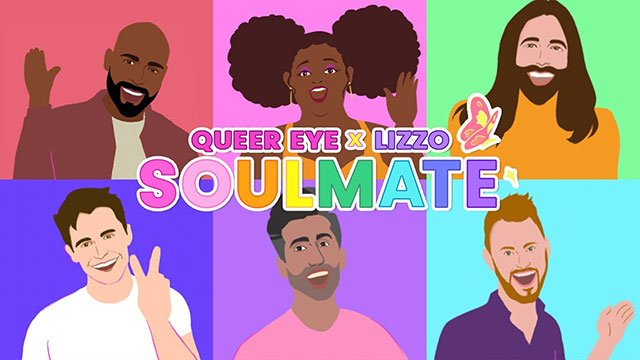 It’s the last weekend of Pride 2020, and since we can’t get out on an actual dance floor here’s new music to bop to from Lizzo and the Fab 5, Ariana and the Rose, The Aces, GRiZ and Sara Bareilles.

• Self-care queen Lizzo teams up with the men of Queer Eye for the music video for her hip-hop/pop tune, “Soulmate.”

The colorful video is an animated Pride-themed romp with the Fab 5 as Lizzo picnics with Bobby, throws a corgi party with Antoni and throws down a pole dance with Karamo.

• Ariana and the Rose serve up an inclusive, colorful celebration of all kinds of love with “True Love.” The synth-pop dance track is a bouncy bop, and the video features six diverse, real-life couples spanning the diverse spectrums of race, age and sexuality.

Ariana DiLorenzo, the band’s frontwoman, is a “proud and fierce ally for the LGBTQ community,” and told NewNowNext that performing at Pride events, lending her voice as a soundtrack to the celebrations, “is an honor.”

• “Daydream” is the latest single from Utah-based all-girl pop/rock band The Aces. While the infectious track is about long-distance lovers, the tune can easily relate to the distance many of us are feeling during the ongoing pandemic.

The band, launched by queer sisters Cristal and Alisa Ramirez, decided to make the video about the crew out on a summer adventure rather than a too “on-the-nose” tribute to romance.

• Multi-instrumentalist and producer GRiZ releases his new single, “Medusa,” featuring DJ and producer Wreckno. What he coins his ‘queer anthem banger’ is a bass-fueled, hip-hop-laden slice of empowerment, created to uplift the underrepresented LGBTQIA+ voices in dance music.

In celebration of Pride Month, “Medusa” is a message to queer kids encouraging them to embrace exactly who they are. (Explicit lyrics).

• And finally, Sara Bareilles covers the title track from the Grammy/Emmy Award-winning TV special, “Free To Be…You And Me.” Bareilles’s pure, soulful voice is perfect for the folk/pop tune.

Created by actress and activist Marlo Thomas (That Girl) in 1972, the iconic album, book, and television special was the first anti-racist, anti-sexist, anti-judgment entertainment for children. All proceeds for the project will benefit NAACP Legal Defense Fund.

Fans of the song will notice the new version of the includes two lyric changes. The word “children” has been changed to “people” in one of the song’s main refrains.

And, in order to better embrace the non-binary community, a lyric that referred to ‘boys’ and ‘girls’ growing up to be ‘men’ and ‘women’ was rewritten: “Every child in this land, may you all understand, that you’re proud and you’re strong and you are right where you belong.”