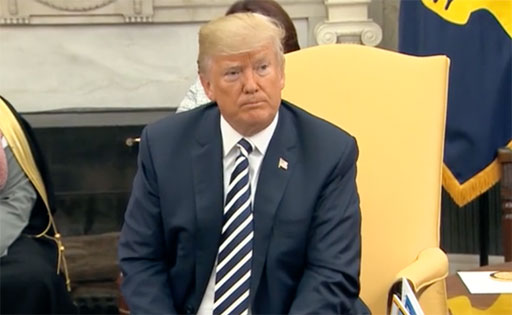 Even though his national security team told Donald Trump specifically not congratulate Russian President Vladimir Putin on his election “win,” in that it was neither a free nor fair election, Trump went ahead and did exactly that, according to The Washington Post.

Trump also ignored the direction to chastise the Russian president for the recent poisonings in the U.K., including one earlier this month of an ex-Russian spy with a nerve agent.

Although several world leaders including Prime Minister Theresa May condemned Putin for the near-deadly attack, Trump did not mention the topic.

Nor did he bring up Russia’s interference in the 2016 U.S. election or attacks on the U.S. power grid.

The president characterized his phone call with the Russian dictator as “very good call,” and added, “We’ll probably be meeting in the not-too-distant future.”

It took President Trump less than 48 hours to congratulate Vladimir Putin on his election. Yet after 14 months, he still refuses to take any concrete steps to prevent foreign interference in the 2018 elections. #ProtectOurDemocracy

BREAKING: WH @PressSec Sarah Huckabee Sanders says in his call to congratulate #Putin on his election “win,” Trump DID NOT raise Russian attacks on our elections, or nerve agent attack in the UK.

General Kelly, next time do it this way. pic.twitter.com/SgkynlIubW

DO NOT LOOK AT THE ECLIPSE
DO NOT TOUCH NASA HARDWARE
DO NOT CONGRATULATE PUTIN pic.twitter.com/eUiCAp8nI8