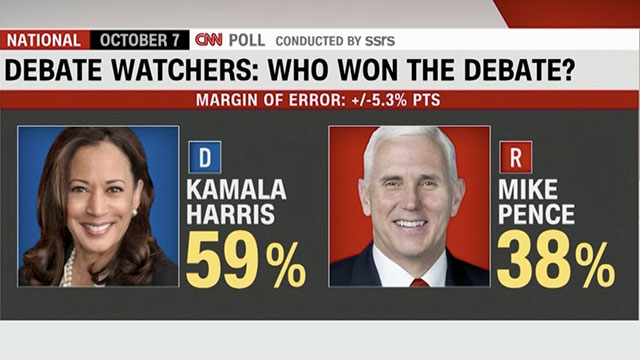 In case you missed it, the 2020 Vice Presidential Debate last night was pretty much what we all expected.

Vice President Mike Pence spent a lot of the 90 minutes interrupting Sen. Kamala Harris, and a fly landed on his head stealing the veep’s thunder.

Harris was fairly restrained and was more successful than Pence at following the agreed upon rules for the debate.

A CNN snap poll taken directly after the event found Harris was viewed as the winner of the debate by an overwhelming majority of 59% versus 38% who thought Pence came out on top.

Also from that survey, Harris went into the debate with 56 percent favorability and afterward that rose to 63 percent, while Pence began and ended the night at 41 percent.

Female respondents said Harris did the best job in the debate by a 69% to 30% margin. Men, meanwhile, split about evenly between Harris (48%) and Pence (46%). Note – women make up a majority of the voting public.

Over at the New York Times, the opinion writers were split over the victor with 11 calling it for Harris, 4 for Pence, and 2 a tie. Click here to see what the group of writers thought were the most pivotal moments and some small remarks that resonated.

At the end of the day, the veep event did little-to-nothing to change the direction of the election. And in that case, Harris did her job.

Social media, however, became enthralled by a fly landing on Pence’s head and remaining for several minutes.

Exodus 8:21 – ..if you will not let my people go, I will send swarms of flies upon you and your officials.. #flygate pic.twitter.com/z6BTtFRbZe

You know you suck really bad when The Fly is more exciting than anything you have to say.🙄pic.twitter.com/z2F2akB00t#flygate#ThursdayThoughts #ThursdatMorning