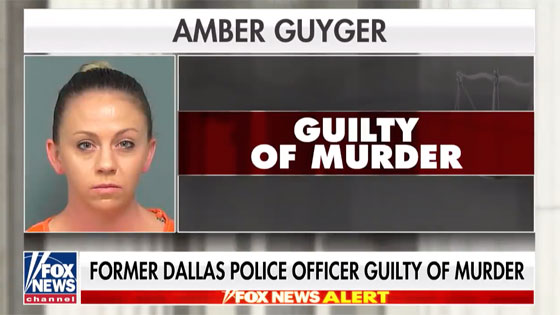 Former Dallas police officer Amber Guyger, who was found guilty of murder yesterday in the shooting death of her neighbor, Botham Jean, was sentenced to 10 years in prison today.

She was facing between 5-99 years in prison.

Amber Guyger, the former Dallas police officer convicted of murder for fatally shooting her unarmed neighbor in his apartment, was sentenced Wednesday to 10 years in prison.

Guyger, 31, learned her fate after a sentencing hearing that included emotional testimony from the family of the victim, Botham Jean, and revelations that she shared racist and offensive texts and social media posts.

Prosecutors had asked jurors to sentence Guyger to at least 28 years — symbolic because Jean would have turned 28 last Sunday.

Guyger did not testify during her sentencing, but she has the opportunity to appeal the conviction in the unique case, which has gripped the city of Dallas and shattered the idea that law-abiding residents can be safe in their own homes.

The jury was allowed to consider whether Jean’s death was the result of “sudden passion,” which meant Guyger acted in the heat of the moment. It carried a lesser sentence of two to 20 years behind bars.

Guyger shot Jean after walking into his apartment thinking it was hers at the end of a shift. Believing he was a burglar in her home, she shot him while he was armed with just a bowl of ice cream.

This stunning moment, between Jean’s brother and Guyger, happened at the sentencing today.

Don’t see I’ve ever seen this, before:
Botham Jean’s brother asked a judge if he could get off the witness stand & hug Amber Guyger. She killed Botham when she went into his apartment, claiming she thought it was hers. Notice the judge dabbing her eyes pic.twitter.com/9jzKnDCDjQ