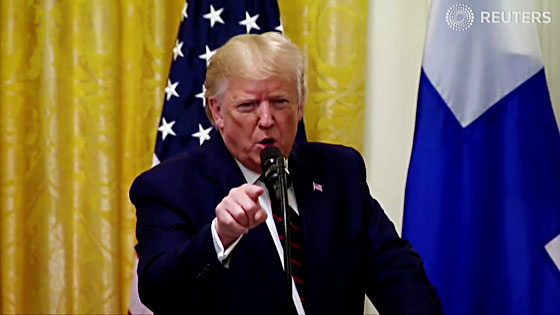 During a press conference with Donald Trump and Finland’s President Niinisto, Jeff Mason from Reuters asked Trump what he wanted Ukrainian President Volodymyr Zelenskiy to do when Trump brought up the business ties to Ukraine of Hunter Biden, son of Joe Biden?

Trump began: “What I want is the following — Why are we the only ones that give the big money to the Ukraine?”

And he never actually answered the question, which spurred Mason to followup on the question.

Serious props to Jeff Mason for trying to get an answer to his question. The Donald is a bit cray-cray here.

And poor President Niinisto for having to be exposed to the Trumpster’s madness.

This latest (much like all the ones that preceded it) Presser was stone cold crazy.

He was on the verge of angrily breaking down in tears over Jeff Mason’s question.

.@jeffmason1 asks Pres. Trump multiple times what he had wanted the Ukrainian president to do regarding the Bidens.

Trump dodges his and @jonkarl‘s questions, instead attacking and berating the media, demanding Mason ask a different question. https://t.co/4ZyHcnSuJR pic.twitter.com/vjJvsDNVBo

Mason asks over and over what he wanted Zelensky to do with regard to the Bidens. Trump is pointedly refusing to answer. Eventually, he demands that Mason ask a question to the president of Finland, advising him not to be “rude.”

May be a first of its kind for any presidential news conference:

Jeff Mason repeatedly asks Trump to clarify what he wanted Zelensky to do:

“Are you talking to me?” Practically yells at Mason to ask the Finnish leader a question instead; Rips “fake” and “corrupt” U.S. media.

The Donald Trump we saw on TV today is the dishonest, feral, ignorant nut job I’ve known for 31 years.

Expect ever crazier conspiracy theories & ever wilder accusations with no factual basis.