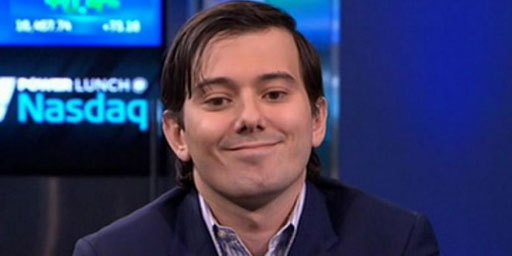 Infamous “pharma douche” Martin Shkreli, has been convicted on three of eight counts on Friday, after a five-week trial in the Federal District Court in Brooklyn.

Accused of eight counts of securities and wire fraud, Shkreli now faces up to 20 years in prison.

The conviction, even as a mixed verdict, was a shattering defeat for the divisive Mr. Shkreli, who said before the trial that he was “so innocent” that the judge, jury and prosecutors would apologize to him afterward.

Mr. Shkreli was accused of securities and wire fraud related to two hedge funds he ran, MSMB Capital and MSMB Healthcare. Prosecutors charged he then illegally used a pharmaceutical company he founded, Retrophin, to repay the defrauded MSMB investors.

The prosecution brought forth an “avalanche” of evidence, as the prosecutor Jacquelyn Kasulis put it in her rebuttal argument, that included a threatening letter he sent to the wife of a former employee, statements he sent to MSMB investors showing great returns at the same time he had no money in fund accounts, three versions of a backdated agreement to make it look as if MSMB Capital had invested in Retrophin when it had not, as well as claims about assets under management that were wildly out of line with his actual fund size.

“It’s time for Martin Shkreli to be held accountable,” she said.

Shkreli came to the public spotlight after raising the price of a drug called Daraprim from $13.50 to $750 overnight. However, this case had nothing to do with the Daraprim debacle.