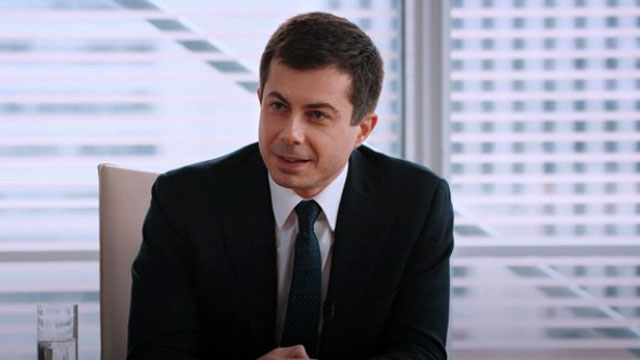 In this clip from the roughly 80 minute interview with Buttigieg, he’s asked why he doesn’t seem as emotive or angry as other young people.

The question comes from Binyamin Appelbaum, a leading writer for the board on the subject of economics.

In framing his question, Appelbaum asserts that Buttigieg has been “on the front lines of corporate price fixing,” prompting Mayor Pete to call ‘bullshit.’

Though he may not be as emotive as some of his Democratic rivals, @PeteButtigieg shows the editorial board a flash of the passion that he says propels his campaign. See more this Sunday on a special 2020 endorsement episode of @TheWeekly. Full transcript: https://t.co/ooUhuoRBV9 pic.twitter.com/6qXKtgA0WF

You can read the full transcript of Buttigieg’s 80-minute interview here.

But below is the excerpted transcript with the Times’ annotations in italics.

Appelbaum: You’ve been on the front of our misadventures in foreign policy. You’ve had direct experience in many of the things that make a lot of young people very angry about the way that this country is operating right now. You don’t seem to embody that anger.

In 2003, Mr. Buttigieg — then a junior at Harvard — spoke at an antiwar rally in Cambridge, Mass., protesting the invasion of Iraq. More than a decade later, in 2014, he served seven months in Afghanistan as a lieutenant in the U.S. Navy Reserves.

Buttigieg: So the proposition that I’ve been on front lines of corporate price fixing is bullshit. Just to get that out of the way.

Appelbaum: You worked for a company that was fixing bread prices.

Buttigieg: No, I worked for a consulting company that had a client that may have been involved in fixing or was apparently in a scandal. I was not aware of the Canadian bread pricing scandal until last night.

Mr. Buttigieg’s campaign has maintained that he only recently heard of the bread price-fixing scheme and while he was working with Loblaws focused on price cuts more broadly across the grocery store chain.

BA: Do you feel the anger that many young people feel about the state of ——

Yeah, of course, because it destroyed my city. I grew up surrounded by crumbling factories and empty houses.  My city lost 30,000 of its 130,000 people, largely before I was born.

So I’m under no illusions about the problems that are present in American capitalism generally and were unleashed beginning with the Reagan era specifically. And while I may not be as emotive sometimes about my sense of anger or frustration or injustice — and I would argue that some people are given more room to be emotive than others — I would not be doing any of this if I were not propelled by a level of passion.

The editorial board’s pick to be the nominee will be revealed on the January 19 episode of “The Weekly,” The Times’s television show on FX and Hulu.