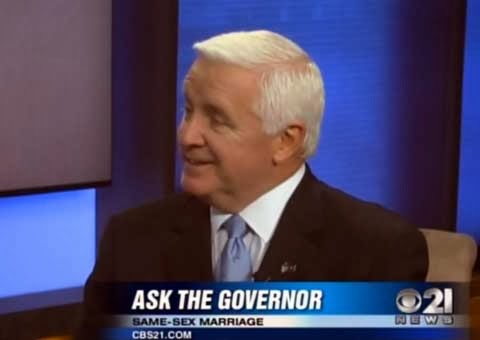 Gov. Tom Corbett, a conservative Republican who has opposed LGBT rights in the past – most notably marriage equality -says he is ready to support employment protections for gays and lesbians in the workplace, he told the Philadelphia Inquirer Wednesday.

“I’ve had people come and talk to me about how they were discriminated against,” said Corbett. “The federal government has antidiscrimination laws. I believed they covered it.”
But federal law does not prohibit employers from firing, refusing to hire or promote someone because of their sexual orientation or gender identity.
Pennsylvania state law does not currently prohibit discrimination in public accommodation, housing, education, or employment on the basis of sexual orientation or gender identity. A bill that would make it illegal to fire someone for being LGBT was introduced in the state House earlier this year, but has since failed to move out of committee. Pennyslvania is also the only state in the Northeastern U.S. that has yet to embrace marriage equality.

Openly gay state Rep. Brian Sims, released this statement praising the governor’s move toward equality for all:
“I have long believed that equality is not a one-party issue,” said Sims. “We continue to see our elected officials in Pennsylvania coming out on the right side of history, and Governor Corbett is no exception to this trend. Last month, Senator Pat Toomey, also a conservative Republican, voted to advance the Employment Non-Discrimination Act (ENDA) in the U.S. Senate, demonstrating to Americans across the country that support for LGBT civil rights and a conservative ideology are not mutually exclusive. To those conservative leaders in our government who have shied away from being vocal about non-discrimination legislation in Pennsylvania, I hope this is a green light to openly support non-discrimination legislation.”
(source)