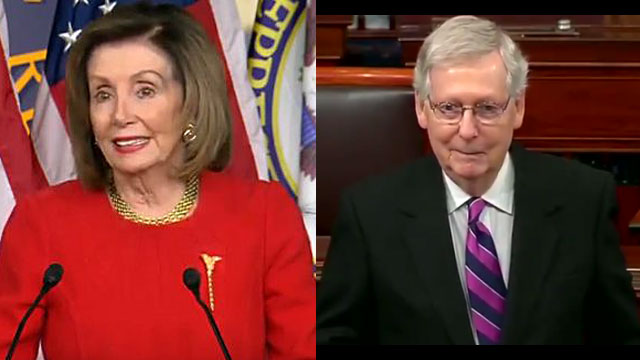 The Washington Post reports Speaker of the House Nancy Pelosi will transmit the articles of impeachment against Donald Trump next week.

As recently as Thursday, Pelosi continued to insist that Senate Majority Leader Mitch McConnell (R-Ky.) should release a resolution laying out rules of a trial before the articles were transmitted.

The crux of the Democrats’ case is the allegation that President Trump tried to leverage a White House meeting and military aid, sought by Ukraine to combat Russian military aggression, to pressure Ukrainian President Volodymyr Zelensky to launch an investigation of former vice president Joe Biden and his son Hunter Biden, as well as a probe of an unfounded theory that Kyiv conspired with Democrats to interfere in the 2016 presidential election.

Pelosi has delayed transmitting the articles for weeks in an effort to pressure Senate Majority Leader Mitch McConnell to announce the rules for the impending trial.

On Thursday, McConnell told senators they should keep their schedules flexible for the end of next week when they might take up impeachment.

In related news, Sen. Susan Collins of Maine says she is working with a small group of fellow Republican senators towards the goal of ensuring witnesses will be called during the Senate trial.