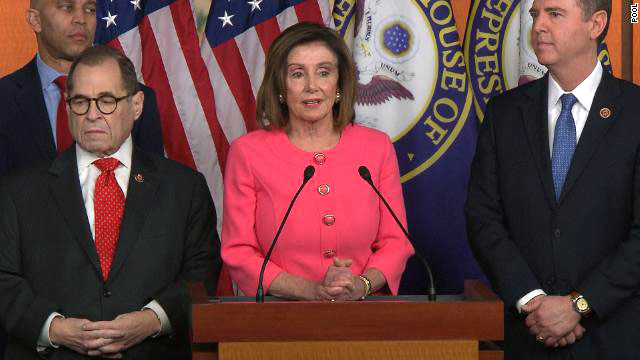 Update: NBC News reports the House voted 228 to 193 on Wednesday to send the impeachment articles against President Donald Trump to the Senate.

One Democrat opposed the resolution — Rep. Collin Peterson of Minnesota, who also voted last month against both articles of impeachment.

Speaker of the House Nancy Pelosi named the team of House managers this morning tasked with presenting the case against Donald Trump during the impeachment trial in the U.S. Senate.

House Speaker Nancy Pelosi tapped two trusted committee chairmen to lead the team that will make the case in the Senate for President Trump’s removal from office, supported by a relatively small cast of additional impeachment “managers.”

Confirming widespread speculation that swirled for weeks as she held back the articles, Pelosi turned to House Intelligence Committee Chairman Adam B. Schiff (D-Calif.) and Judiciary Committee Chairman Jerrold Nadler (D-N.Y.) to lead the House team. She made the announcement at a Wednesday news conference after keeping the cast of managers under tight wraps for weeks.

The seven-member team is smaller than the 13-member squad that presented articles of impeachment against President Bill Clinton to the Senate in 1999, reflecting a more tightly controlled approach to the investigation.

Later today, the full House will vote on the team of managers and to transmit the articles of impeachment to the Senate. The House managers will then process across the Capitol to hand deliver the articles in person.

All of the House managers have extensive backgrounds in law. The only non-lawyer, Rep. Val Demings of Florida, serves on both the House Intelligence and Judiciary committees and was the first woman chief of police in Orlando. 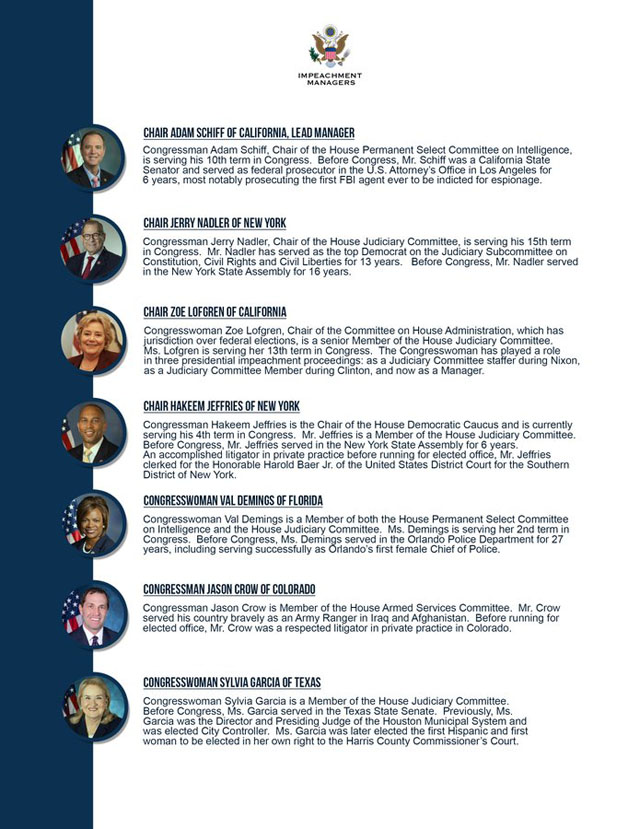