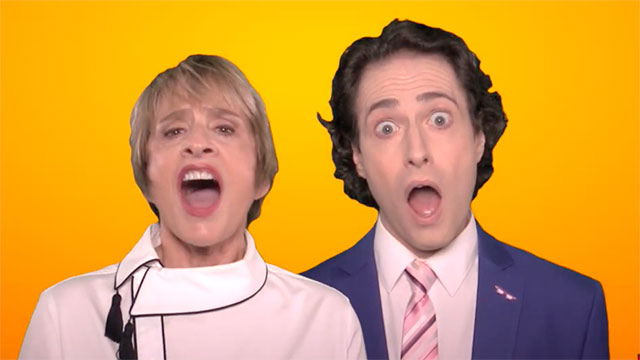 The duo teams up on a parody of “If Mama Was Married” from the 1959 Jule Styne/Stephen Sondheim musical Gypsy.

LuPone took home the Best Actress in a Musical Tony Award in 2008 for her star turn in the revival the acclaimed musical.

In the video, Rainbow is attempting to ‘moderate’ a presidential debate between Donald Trump and Joe Biden, but becomes frustrated in the process.

LuPone appears in a puff of smoke: “When gay men are in crisis, I just materialize.”

I won’t spoil the jokes, but these are some of Rainbow’s best parody lyrics in some time. Hit the play button and enjoy 🙂