Broadway diva Patti LuPone won Twitter today as video of an exchange between the star and a woman in the audience at COMPANY on Broadway went viral.

The incident reportedly occurred after the evening’s performance as LuPone and the rest of her cast took part in a post-show Q&A hosted and filmed by the American Theater Wing.

During the Q&A, LuPone called out an audience member who apparently wasn’t wearing a face mask properly. Currently, the Broadway League’s COVID-19 safety protocols require all audience members to wear a mask inside theaters.

“I’m serious,” continued the two-time Tony Award winner. “Who do you think you are, if you do not respect the people that are sitting around you?”

After the woman in the audience told LuPone “I pay your salary,” LuPone responded: “You pay my salary? Bullshit. Chris Harper pays my salary,” referring to the producer of COMPANY.

Putting a button on it all, LuPone repeated, “Who do you think you are? Just put your mask over your nose.”

Hysterically, the Twitter account for the show has already changed its bio line to read, “Chris Harper pays my salary.” 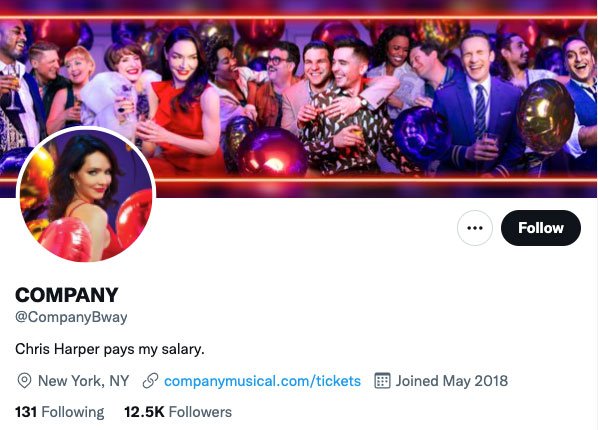 It’s important to note that COMPANY, and many other Broadway productions, have had to cancel performances due to COVID-19 over the past several months. LuPone clearly doesn’t want to see her show cancel anymore performances.

In January 2009, just days before the closing of Gypsy, she stopped in the middle of “Rose’s Turn” and loudly demanded that an audience member attempting to record her performance be removed from the theater. After he was removed, LuPone restarted her number. The audience applauded her stance.

Good morning to Patti LuPone, who said what every service employee has wanted to say for the last 2 years.

Last night the wonderful Patti LuPone told an audience member who refused to wear a mask to “GET THE FUCK OUT!” Critical Gay Theory tells us this was the original title of Could I Leave You from Follies

Fun fact: an obscure NYC law states that Patti LuPone is allowed to kill one person a year with her bare hands.

If Patti LuPone told me to “get the fuck out”, I would go into the witness protection program and live out my days on a goat farm in the Appalachians.

Imagine the level of derangement in your life to think it’s OK to shout “I pay your salary!” to Patti LuPone!

If Patti LuPone ever told me to 'get the fuck out', I'd, in fact, get the fuck out, change my name and reevaluate my very existence. https://t.co/x0oEex5BlU