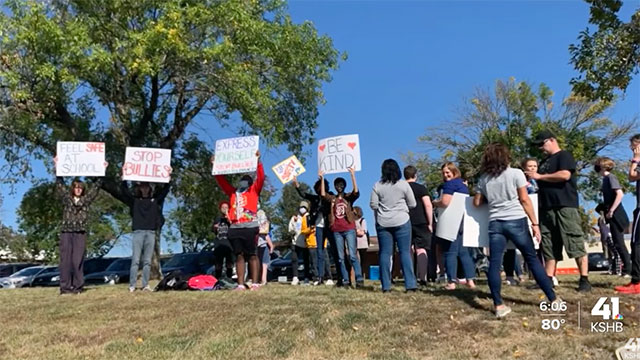 Even though out Missouri high school student Danny Lillis reported numerous incidents of bullying by classmates since the beginning of the school year to administrators at Lee’s Summit High School, nothing was done to help him feel safe.

And when Lillis and a friend finally stood up for themselves, they received the same suspension as the bullies. That sparked a walk out by over 100 of Lillis’s classmates in protest.

According to local NBC News affiliate KSHB, Lillis and his group of friends had been targeted by a group of bullies for weeks. Lillis says the group repeatedly yelled hateful remarks and even threw food at him.

When he informed school officials about the bullying on at least four occasions saying he didn’t feel safe, “nothing changed.”

Lillis’s mother, Missy Lillis, says she met with the school’s vice principal weeks ago about creating a more safe environment for Danny and was told that extra staff would be in the lunchroom to stop the abuse.

But, according to Lillis, no additional staff materialized to protect him and his friends.

Last Wednesday, the tensions escalated into a physical assault when the bullies started in yet again. Lillis’s friend, Malani Hohlbaugh confronted one of the haters and the bully shoved her. When she shoved back, the student punched her, breaking her nose.

Lillis also ended up with bruises and cuts to his face.

As a result of the altercation, the bullies and Lillis and Hohlbaugh were all suspended for five days.

After Danny Lillis and his friends got into a physical fight with their bullies, Lillis was among those suspended. https://t.co/whDe8CMa8i

Melanie Davies, mother of Hohlbaugh, told the Kansas City Star, “Every single time that this happened, our kids have gone to student administration and reported it. There is supposed to be a zero tolerance policy for bullying, but nobody is doing anything about. They haven’t gotten the help that they needed.”

“I don’t condone my daughter using violence at school or anywhere else,” Davies went on to say. “But I also do know these kids were pushed to a point that they felt like if nobody else was going to stick up for them, they had to stick up for themselves.”

It was after Lillis and Holbaugh received the same punishment as the bullies that the school’s students organized a walkout on October 4.

Lillis told KSHB, “We decided to do the walk out today to basically show movement towards our school an administration for the lack of action toward these repeated and multiple events that have been happening to me and my friends.”

Following the walkout, the school district said it supports the students right to voice their opinion.

“We support our students’ right to express their voice peacefully and are communicating with students about the best ways we can support them,” the district said in the statement. “LSR7 is committed to supporting and working together with students to address their concerns with fairness, dignity and respect.”

Even after the show of support by his fellow classmates, Lillis says hesitant to return to the school once his suspension ends.

“I’m terrified to step another foot in that school,” he told KHSB. “To walk into a building where someone had just punched my friend and broke her nose due to this whole situation.”

Students have launched a Change.org petition demanding Lillis and Hohlbaugh’s suspensions be removed from their records and the school’s Zero Tolerance Policy for bullying and harassment be more fully enforced.

At this writing the petition has garnered over 3,100 signatures.

Katy Bergen, a spokesperson for Lee’s Summit R-7 School District said in a pretty tepid statement to The Kansas City Star that, “all forms of bullying are prohibited in LSR7. We investigate all complaints of bullying that we receive.”

“In LSR7, it is a top priority to ensure an inclusive culture where our students, staff members and families are valued and treated with dignity,” added Bergen.

From the reports available from several news outlets, it doesn’t sound like Lillis and his friends feel very “valued” or “treated with dignity.”