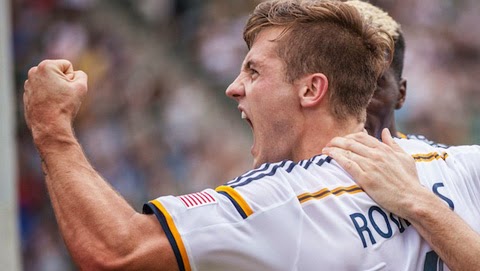 While Michael Sam may still be struggling with the NFL, and Jason Collins’ future with the NBA seems unclear, the LA Galaxy pro-soccer team is more than happy to keep out Robbie Rogers on the field.

The LA Galaxy announced today that the club has signed defender Robbie Rogers to a multi-year contract extension. Rogers, an MLS veteran and former U.S. Men’s National Team member, joined in Galaxy in May 2013 and has made 30 appearances and 22 starts as a member of the Galaxy.

“We are excited that Robbie will remain a part of our organization going forward,” LA Galaxy Head Coach and General Manager Bruce Arena said. “He has proven to be a dynamic player in our League and an integral part of our success this year. We look forward to his continued contributions in the years to come.”

It’s a good year for Rogers. Not only does he resign with the LA Galaxy, but a sitcom based on his life has gotten the green light from ABC.