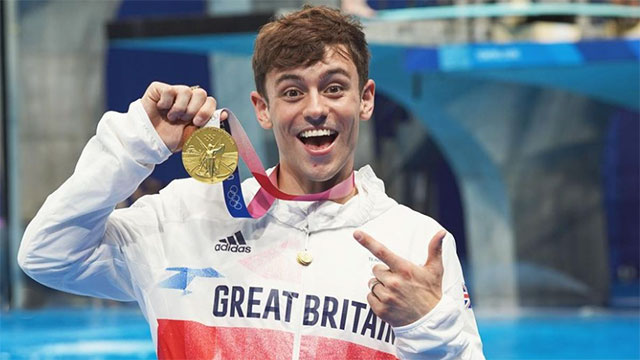 The British duo ended the event with a near perfect dive that left them with a score of 471.81. That meant a guaranteed silver medal. But the powerhouse Chinese team of Chen Aisen and Can Yuan had one dive left with room to pass the Brits.

But the Chinese divers fell short by 1.23 points once the final scores were tabulated.

It had been 13 years since Daley’s first Olympic appearance. Now 27-years-old, the joy and sense of accomplishment was palpable.

“I still can’t honestly believe what is happening,” Daley told BBC Sport. “That moment, being about to be announced as Olympic champions, I was gone. I was blubbering.”

In 2012, Daley won his first Olympic medal at the age of 18 when he took home the bronze at the London Games. He repeated that feat at the 2016 Rio Games.

Australian diver Matthew Mitcham became the first out athlete to become an Olympic champion in 2008.

At a press conference immediately after the event, Daley shared his personal journey as an LGBTQ athlete at the Games.

“I feel incredibly proud to say I am a gay man and also an Olympic champion.”

Gold medal winner Tom Daley says he hopes his performance will inspire young LGBT people to realise “you can achieve anything”.

“There are more openly out athletes at these Olympic Games than any Olympic Games previously,” Daley told reporters. “I came out in 2013 and when I was younger I always felt like the one that was alone and different and didn’t fit in. There was something about me that was always never going to be as good as what society wanted me to be.”

“I hope that any young LGBT person out there can see that no matter how alone you feel right now, you are not alone, and that you can achieve anything,” continued the gold medalist. “And there is a whole lot of your chosen family out here to support you.

Daley’s husband, Dustin Lance Black, and the rest of his family were watching from Canada due to COVID-19 restrictions.

Black tweeted, “No words! So so many tears! @TomDaley1994 you’re an OLYMPIC CHAMPION! Congratulations Tom and @MattyLee!”