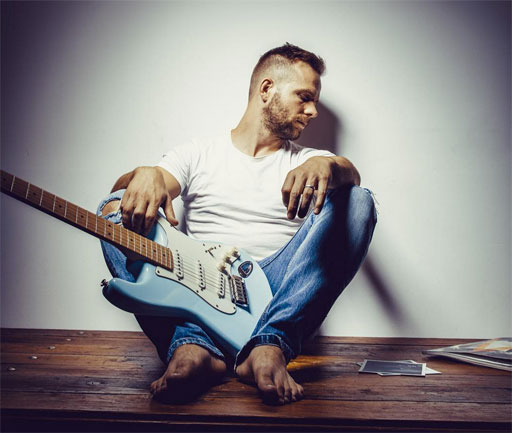 Out singer/songwriter Tom Goss is one of the most popular artists of the modern indie gay recording landscape, and for good reason.

Since his 2009 debut album, Back To Love, Goss has developed a loyal fan base who have come to know him through his wide-ranging, intimately-personal songs and music videos.

From the serious tenor of his acclaimed cover of the Dusty Springfield classic, “Son of a Preacher Man,” to his fun-filled, rollicking romp in “Bears,” Goss has consistently given fans music they can relate to that presents a diverse view of the queer community.

For example, the aforementioned “Bears” music video came out of a desire to share his appreciation for plus-size men.

Goss admits that he didn’t really have much of a sex drive until, at the age of 22, he discovered his attraction for big, beefy bears.

That revelation ultimately led to his 2010 marriage to husband, Mike Briggs.

Released in 2013, the “Bears” music video is an upbeat fantasy romp for Goss that’s earned him a ‘big’ following in the bear community.

But it seems Goss didn’t quite get his message out as articulately as he thought.

“Even after ‘Bears,’ people would constantly ask me if I really had a thing for large men,” says Goss. “I used to get annoyed by the question, but then I started to reflect on it and I came to the conclusion that I hadn’t done an adequate job of describing what is so intoxicating to me about men of size.”

“For this one, I wanted to write something that was more specific and mature,” he explains. “I wanted to be direct, honest and graphic; to really convey the shape, the allure, the seduction of big men.”

The result is Goss’ new music video, “Round in All the Right Places,” released October 12.

The song, written with a nod to the style of 60s doo-wop, is the first single from his upcoming 2019 album, Territories.

Directed and co-produced by Goss, with additional production and cinematography by Nathaniël Siri, the video for “Round in All the Right Places” features a several friends plus some men he approached online.

“I couldn’t be happier with the visuals, and the beautiful men behind the visuals,” Tom shares. “Yes, I absolutely objectify the men, but I’m careful to do it in a way that is respectful, artistic and focused on that which makes them beautiful and unique.”

“Too often in media, large men are painted as villains or buffoons; the butt of a joke,” says the guitar-toting troubadour. “The goal here was to uplift and empower men of size and embrace their beauty.”

And, for Goss, that body-positive message isn’t limited to just plus-sized men. “Everyone should see the beauty in themselves and love every inch of their bodies.”

Watch “Round in All the Right Places” below and find more info about Goss & his music at his official website here.