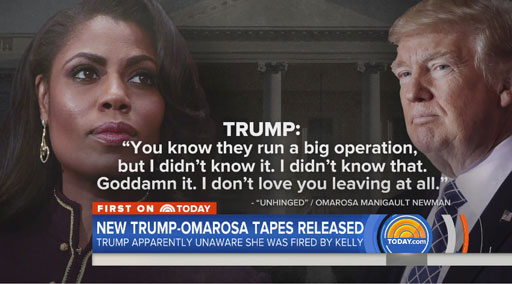 Allegedly recorded the day after she was fired, in the conversation Trump appears to have no knowledge his former reality show star had been fired.

Omarosa Manigault Newman, the former “Apprentice” contestant who became a White House aide, has provided an audio recording that she says is from 2017 and on which President Donald Trump expresses surprise that she’d been fired from his administration. The tape, which was played exclusively Monday on “Today,” appears to show Trump having no idea that Newman had been dismissed by his Chief of Staff John Kelly.

“Omarosa? Omarosa what’s going on? I just saw on the news that you’re thinking about leaving? What happened?” Trump is heard saying on the tape, which Newman said was made one day after her termination in December 2017 when Trump called her. “You know they run a big operation, but I didn’t know it,” Trump is heard saying on the tape. “I didn’t know that. Goddamn it. I don’t love you leaving at all.”

#Breaking: @OMAROSA provides @NBCNews with this exclusive excerpt of a recording of a phone call that she says she received from President Trump the day after White House Chief of Staff John Kelly fired her. pic.twitter.com/OJe47RdcDC

“Do you think the President lies often?” –@savannahguthrie

Here’s the full interview with NBC’s Savannah Guthrie. Well worth the watching. Omarosa is incredibly disrespectful and demeaning to Guthrie.

“There’s a lot of very corrupt things that are happening in the White House, and I am going to blow the whistle on a lot of this.”