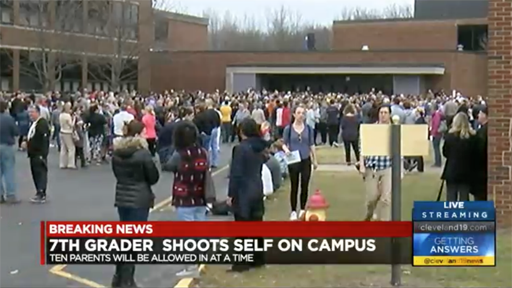 Gun advocates say there should be MORE guns in schools.

And that’s how these kinds of incidents happen.

From the CBS affiliate in Cleveland:

Schools in the Jackson Local School District in Stark County are on lockdown after a seventh grade student shot himself on a middle school campus.

Just before 8 a.m., a student shot himself in the men’s restroom at Jackson Memorial Middle School, according to Jackson Township Police. The school is about 55 miles south of Cleveland.

Police say the boy was transported to a nearby hospital. His condition is not known at this time.

Police have not said if the shooting is accidental or intentional, but they are calling it self-inflicted.

All other students and faculty members were no injured.